Parkruns; plus Steve, Britta and Albert

It bears repeating that 'representing' in parkruns is very probably one of THE best ways to passively promote vegetarianism. Cap doffed to all those taking part.

Moving ever-closer to his main goal of competing with race-partner Britta in the Gower SwimRun, Steve (pic) recently included the short-course version of the Great North Swimrun around the top end of Windermere as part of his preparation. Stages for this event totalled 10.8km of running and 1.8km of swimming. Damp, drizzly weather and a slight chop on the lake were better than the forecasts for high winds and driving rain, but still meant that fighting off chills was a major factor, especially where the Brathay and Rothay rivers enter the Lake. Battling fatigue and cold, Steve reports having to “have a word with myself” before the final 700m swim stage. It worked; he finished in the top half of the 200+ field overall.

5 days later, and this time joined by SwimRun partner Britta W, the pair took on the 4-day Tour of Tameside where - just as the name suggests, four events are run over the course of consecutive days. These events are: the X-Trail 10k, Hell on the Fell, Hero Half Marathon and the Dr Ron Hyde 7 mile road race. Steve reports that the first two days went well but recovery for the third and fourth stages was severely hampered by necessary medication, which meant deep reserves had to be tapped... simply in order to finish. Finish, though, they did.

Following something of a recovery and a return to CaniX action, Steve did the Dog Jog's Bark in the Park 5K canicross event with new canine partner Albert last weekend. Albert is a rescue dog with a very troubled history and a very different character to Steve’s former canine partner, Lennie. It’s fair to say that Albert had already been written off a few times in his short life, but following extremely fortunate intervention is nonetheless now slowly rehabilitating under the expert and nurturing eye of Mr C. The fact that the pair finished this event without ‘incident’ is testimony to both.

Only two days after keeping Albert on the straight(ish) and narrow, Steve did the short-course version of the Sale Aquathlon (450m swim and 2.5K run) and - benefitting from better recovery and warmer waters - returned to the happy state of actually enjoying the competition. Britta W, meanwhile, did the longer-course at the same event (900m swim and 5K run) and - backing up her awesome 1st lady at the previously reported Conway Ocean Swim, promptly took 1st lady at this event, too. 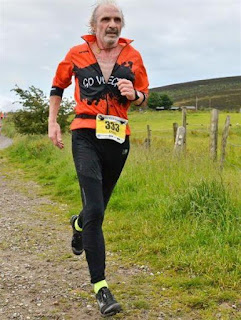