Has been going long. He’s:

Assisted an ultra-endurance-runner friend over the course of two of the five stages in a successful attempt on the Bob Graham Round; a 66 mile, 27,000 ft circuit of 42 of the highest peaks in the Lake District - all to be completed within 24 hours. The challenge was completed, but with only a few minutes to spare… Some scene-setting footage appears here.

Knocked out a personal best in the 56 mile Bullock Smithy ultra fell race, with a truly impressive 18th overall finish in a time of 12 hours and 27 minutes.

Performed 'encouragement duty' for Rosie W in the Kielder Marathon (pic). Speaking of…

Has concentrated on distance running and, as above, built up enough endurance to race the hilly, twisty and altogether brutally difficult Kielder Marathon where - thanks to some incredibly meticulous preparation and solid-race-plan execution - she completed the event well up the (massive) field and finished 38th in category.

Has continued to baffle medical professionals by performing at a level - given his conditions - that just shouldn’t be possible. He’s:

Finished 2nd in age group at the tough Ampleforth College half-marathon, which he completed in 2.06.08, over five minutes quicker than his last attempt at the event in 2017.

Raced the Outlaw X half-ironman distance triathlon at Thoresby Hall (1.2 mile swim / 56 mile bike / 13.1 mile run), in which he battled through very cold conditions and a race of genuine attrition to take an age-group podium spot and his fourth consecutive Outlaw trophy.

Completed the Bridlington half-marathon in horrendously cold, windy and miserable conditions that saw a quarter of the field simply not even start.

Has been mixing it up as usual. She’s:

Raced the ‘Crazy Legs’ Darley Moor Sprint Duathlon where - in spite of feeling her performance was slightly below par - finished well up the highly-competitive ITU-qualifier-event field.

Slotted in the Pontefract Half-marathon.

Returned to duathlons to compete in the ETU-qualifier Bedford Sprint draft-legal event on a fully closed circuit where, during the first run leg of the race - and in spite of driving rain and gusty winds - she registered her fastest 5K effort in about five years to finish in a very credible time of 1.22.18.

Highlight time! Emma’s performances have been good enough to mean she’s qualified for the 2020 European Triathlon Union championships to be held in Spain.

Has also mixed things up. He’s:

Scored an age group victory and a high overall position in the Derby Sprint triathlon.

Left his comfort zone to race in a longer-than-usual-for-him off-road duathlon in the form of the tough Kielder Run Bike Run event (11k run / 25k Bike / 6k run) in which - in spite of well and truly running on empty in the last run stage - had done enough damage on the gravel-bike leg to secure a 15th overall position; beating, in the process, a certain Steve Cram!

Has continued in his laudable quest to rehabilitate the still-sometimes-challenging Albert-the-rescue-dog by ‘packing’ with him (as only people like Steve are able) in the Canicross Midlands Box End Cani-X. 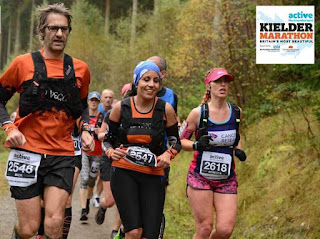