Once again, Go Veggies have been very active this past three weeks. Here’s a whistle-stop tour of known open-event activities since the last report.

Jamie can crunch big bike miles and regularly racks up the longest bike runs amongst Go Veggies on Strava. On Sunday, 2 June 2019 he put some solid recent training to his latest test by taking on the notoriously tough and hilly ‘Epic’ version of the Malvern Mad Hatter cyclosportive event.

For a whole myriad of litigious reasons, sportives are technically not races… but try telling that to most that compete in them (sorry) complete them! Because the events aren’t races, organisers can’t declare ‘winners’ as such; but what they can do is rank finishers to a standard according to perceived performance based on a number of factors including variables such as terrain, condition, time taken to complete the course etc. These standards are known as gold, silver and bronze. Suffice to say that a very non-racing Jamie conquered the 100 miles of gruelling terrain much quicker than most others to finish in 06:16:13 - and achieved the much-coveted gold standard.
Steve C

Still unsure about being able to commit to the upcoming Gower SwimRun race, Steve - together with race-partner Britta W - has continued to take on organised cold / tough open water swims in order that the Gower event won’t be a complete shock to the system in the happy circumstance he’s able to compete. In preparation, Steve’s recently completed both Great Manchester Swim and the 2 kilometre version of the Colwyn Bay Ocean Swim. He reports both as tough but the ocean swim in particular was very cold and - as is the case with open sea swims - took a fair bit more effort than your average pool session with tides, currents, swells and the wind all conspiring to make a hard sport even harder.

It’s often the case with such swims that you can grind away for what seems like ages and seemingly get absolutely no nearer to buoys / landmarks / your eventual destination. This is mostly about conditions and open-space perception but Steve tells an amusing tale of an incident that happened whilst he and Britta were waiting to start their own effort and watching the 3km version of the event. One of the turn buoys came loose and was stealthily, almost imperceptibly, yet inexorably, drifting away from the approaching competitors. Indisputably, when in the water and grinding away it would have been almost impossible to fathom this cruel twist and bewildered competitors would have just kept on slogging, cursing and wondering why they ever took up swimming in the first place. It was only thanks to a race official in a power boat that meant no-one in the 3K race is - even now - still going…

Here’s hoping that Steve’s health and niggles allow him and Britta to have a fair crack at the formidable Gower event.

Continuing his good early season form Steve acquitted himself well at the Wetherby Sprint triathlon last bank holiday Monday. A cold and turbid 750m river swim saw him in a more-than-a-little flustered mid-pack position but a very windy and rolling 20K bike leg saw him make the most of his cycling strength to overhaul most of the field and enter T2 in third position overall. In spite of a comparatively weaker run and a pretty testing run leg he (just) managed to hold this placing to the finish. Not that it can be taken for granted these days, but the third overall was also good enough for an age group win.

In completing the Nottingham Outlaw Half (70.3 mile) event last weekend, Jon ticked off a milestone in as much as it was the 25th half-distance event he had competed in. Distances for 70.3 events break down as a 1900m swim, a 56 mile bike and a half marathon (13.1 mile) run to finish. The ‘cold theme’ endured by other Go Veggies held true for the event with the swim especially resulting in an inevitable tightening of joints and muscles and a commensurate hard start to the bike leg. Jon reports settling in, though and - once warmed up - had an almost enjoyable run leg in what turned out to be temperature-perfect conditions.

On the run-in to T1, Jon was cheered on by one of the event marshals who’d seen the 2016 TV program in which Jon’s remarkable achievements in full distance races - notwithstanding his various heart operations, artificial valves, pacemaker and ongoing complications - were explored and reported. The marshal was at pains to communicate that he’d sought out and watched the program just for inspiration.

As reported on numerous occasions, Jon is genuinely inspirational and it’s great to know that his attitude and achievements are increasingly widely recognised.

Emma continues to mix run races and multisports doing both the Askern 10K Road Race and Darley Moor Duathlon (run 5K / bike 20K / run 2.5K). The Askern 10K resulted in a time of 53:05 and a category position of 12/34 while the Darley Moor Duathlon resulted in an overall time of 1:14:21 and a 9/14 in category. Emma was disappointed with this result but did beat her previous best time at the same event by two minutes in spite of very cold, wet and windy conditions (pic). Added to the mix was the fact that this event was a qualifying event for the upcoming ETU duathlon European championships, so competition was as tough as it gets in the UK. 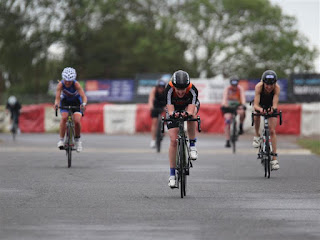