This pleasant trail race through woodland - or rather normal trail race through pleasant woodland - saw Emma S and Mick W both competing, Emma by design and Mick because he had a very last minute chance to take the offer of a free ‘spare’ number. And naturally, being from Yorkshire - though markedly unprepared for 10K efforts - didn’t really have a choice. Both did well: Emma clocked a 54:05 to finish 2/19 in her age group and 89/239 (including males) overall, whilst Mick did a 44:54; also good enough for a 2/32 in age and a 22/239 overall.

Mick ‘unpreparedness’ was due to his training regime of the past couple of months, which has seen him regularly putting in huge distances and running the country’s mountaintops, both day and night, in preparation to be a support runner for a friend who is due to have a crack at the Bob Graham Round: a challenge so outrageously difficult that it simply beggars belief.

On 7th July, Jon continued with his preference for extended efforts and competed in the middle distance ‘Outlaw Half at Holkham’ triathlon (Swim 1900 metres / Bike 56 miles / Run 13.1 miles). A problematic swim saw Jon at something of a disadvantage approaching T1 but once on the bike things began to improve. In fact, they improved to the point where Jon himself was quite surprised by the speeds and heart rate readings he was seeing. He managed to maintain a higher heart rate than usual for the entire duration, and even covered the bike leg a full six minutes quicker than he’d achieved on a much flatter and ‘easier’ course of the same distance a few weeks ago. This theme continued in the run. In spite of very warm conditions, Jon managed to retain a good run pace throughout and this time matched the run split he’d achieved in the (much flatter) event he’d tackled the last time out.

At the end of the piece, and once again deservedly roundly celebrated by organisers, commentators, officials and fellow competitors who know of his medical conditions, Jon achieved a remarkable 3rd in age.

Following up on his inauguration to gravel bike racing earlier in the season, Steve took to the start of the Yorkshire True Grit 20-miler a couple of weekends ago (pic). Though comparatively short for an off-road event, the organisers proudly boast of the difficulty of terrain. One of the catch phrases associated with this event (which is based on the spectacular if occasionally vicious North Yorkshire Moors) is delivered in the brogue: “D’yer like climbin’ lad? - well tha’d best”. The course lived up to reputation and as well as the sheer brutality of some of the ascents also featured: single-track that was literally not even as wide as handlebars, boulder-infested fields, numerous gates, and not inconsiderable head of free-roaming livestock. Fair to say navigating the various ‘features’ whilst going as fast as physically possible (no pacing necessary over 20 miles) requires a broad skill set that Steve is undoubtedly able to draw upon. After jockeying for position in the top half dozen throughout the course of the race, he eventually finished 4th overall - and was justifiably quick to point out that the combined age of the three who finished ahead of him was something almost approaching his own.

Back in the world of multisport, Steve competed in the Washington Sprint Duathlon last Sunday (Run 5.2K / Bike 20K / Run 2.8K). The run leg of this course is a multi-lap affair and is more than a little undulating. The bike leg, too, is a multi-lapper and though not as severe as the run, has its fair share of ‘rolling’ ups-and-downs. This didn’t deter Steve from using a single-freewheel bike, though. He reports having made a totally arbitrary decision at the start of the year to use each and every one of his five dedicated racing bikes in anger this season and using the single-speed meant this was mission accomplished. It did no harm, either, with Steve clocking the fastest bike split overall of the day, which combined with a couple of reasonable runs, resulted in an age-win and a 2nd position overall. 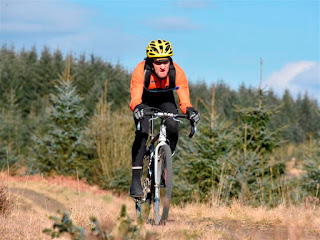