As previously reported, the ‘Not Waving but Drowning’ Swimrun duo of Steve C and Britta W signed up to take on the 2019 iteration of the formidable Breca Gower event but - having had a less-than-straightforward lead-up to the event through all manner of illness, niggles and injuries - were, until the very last minute, unsure as to whether the event would be a ‘go-er’, or not. The event introduction is enough on it’s own to dissuade anyone with less-than-perfect preparation. This is how the organisers ‘promote’ it:

Happily - for us anyway - Steve and Britta are made of tough stuff and with a combination of trepidation, medication, and at least a full-roll-of-KT-tape application, reported to the start. 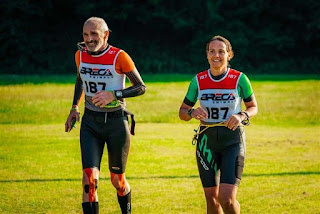 Steve himself tells the story:

“Well, it’s done; not done well since we were last official finishers, but done. Some of the other competitors retired, some timed out. But as far as we were concerned, it’s officially done. It took 10.5 hours in blistering sunshine… but done.

Neither of us felt completely ready for this thing. Back in March when I came back to running I wasn't able to count miles, or even kilometres, but paces; 150 without a break was good.

From then right up to race-day has been a battle. Even Britta was close to falling asleep in the coach on the way over to the start at Rhossilli, not least because she had never been to Gower before and was so taken with it her intended ‘short recce’ of the first part of the course on the Friday turned into a 13-14 mile walk in similar heat and humidity to the conditions we were faced with on race day (24°C).

It got no better once underway; the start was a nightmare. We were slow out on to the swim and so got stuck behind others going very slowly on the broken jagged rocks (think horizontal Crib Goch, boulder-strewn ascents and descents, and mauvais pas all within a few metres of sea level). This was not at all the beautiful seascape it had appeared to be from the safety of the shore. In spite of it all, we made it to the first and second checkpoints; but with only 15 minutes to spare ahead of the cut-off. Adding insult to injury my goggles kept fogging and I couldn’t sight properly, meaning Britta had to take over as lead swimmer for most of the day. As always, she did an amazing job; though she did slightly lose composure and let out an aqua-scream on seeing a barrel jellyfish in the water at one point!

It’s fair to say that neither of us were really able to get the running going, though Britta's inability was better than mine. In spite of it, we somehow started clawing back a little bit of time over the cut-offs, especially when we took the pressure off by deciding to forget about even completing the route and agreeing that we would just start the next section if we were within the cut-off of the last.

It was hard, it was always going to be and, in truth, I reckon we made it even harder as the course was more like 36km running and 6km swimming for us down to the fact that we were so slow, meaning the incoming tide made for more sea and less land. Of course though incredibly tough, I don’t mean to suggest it was all just misery. Britta led us through the longest swim really well and the subsequent jog along the beach was probably the most pleasant bit of the day: apart from finishing.

Abiding memories are mostly just an incredibly dry mouth (however much I drank at checkpoints), the heat and humidity, and the mesmerising yellow rope joining us on the swims snaking out ahead of me. And Britta's company, of course. And the cold cans of beer she bought us to re-hydrate within 20 minutes of completing our 10.5 hour jaunt.

I have no idea how or why we finished, except we're both a bit stubborn that way. The sunburn by the end was horrendous but in spite of the distress and sheer exhaustion, Britta's skipping towards the finish cracked me up.

‘Not Waving but Drowning’ will be back in action at the Buttermere Sprint in less than a month. Hopefully we can get the running going.” 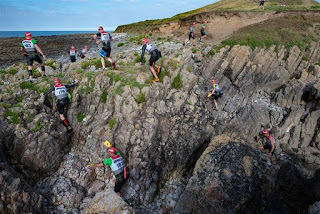 And they were. Steve again takes up the story:

“The Buttermere Sprint event was shortened on safety grounds due to predictions of bad weather. It was nothing like as bad on the day as the apocalypse promised, but it was still determined that the poor visibility,  high winds and occasional driving rain ruled out crossing Derwent Water because the safety-kayakers wouldn't be able to cover a spread out field. Basically, then, the event ended up being an out-and-back affair along the eastern edge of Derwent Water - with an extra hill thrown in for good measure.

With distances reduced to 10.3km of running and 2km swimming (6 runs, 5 swims) it had a bit of an ‘end of term’ feel; but it was still 2 hours and 15 minutes of hard work, especially during one washing-machine-type swim. Undoubtedly the shortening suited us, since we're both still a bit mentally battered by the Gower experience.”

We wish him, and Britta of course, a well deserved rest. 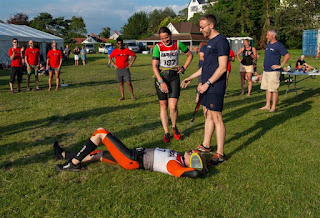