Gravel-bike racing is a relatively new race discipline in the UK, but one which is taking off in a big way. Essentially, these mass-start events are run over mixed terrain that take in anything and everything from country lanes to technical single track. They tend to be point-to-point or large-loop affairs and rarely (if ever) follow a multi-lap format. For those familiar with more traditional cycle-competition, they lie somewhere between road-based sportives and MTB endurance events.

Now, Steve is a long-time and experienced cycle racer but because of a well-documented aversion to getting his bikes dirty has generally steered clear of off-road competition. Indeed, the last time he was ‘persuaded’ to race off road (five or so years ago in the English national championship duathlon) the results were mentally scarring; as per the pic.

However, inspired by his (dirt-loving) brother to try something a little different, on 13th April Steve dipped his toe in the gravel-grinding water and took on the shortest version of the Kielder-forest based Dirty Reiver series of races. Organisers had put on a choice of 200, 130 or 65 kilometre variants of the race but if there’s one thing Steve hates more than getting filthy, it’s a suffer-fest… so the shorty it was always going to be.

Approximately 1,500 racers mass-started the various variants and in spite of most of the race being run over reasonably straightforward loose-gravel forest trails, competitors were subject to constant, incessant, will-this-ever-end type of leg-sapping inclines, invariably followed by sometimes truly hair-raising will-I-actually-get-out-of-this-without-crashing type of descents. Indeed, over the full 65 kilometres that Steve encountered, he reports the flat bits ran to more or less zero metres.

Cutting a (65K) long story short, Steve stayed upright, paced the race well and finished in 2:23:44 both exhausted, and truly full of admiration and incomprehension at the endurance-capabilities of those continuing in the 130 and 200K versions. In terms of position, no one - he reports - was more surprised to find that his was the quickest time of the day in the 65K event resulting in an event-winning 1/135 finish overall.

Jon continues to bewilder his medical consultants and recently competed for his 8th time at the annual Helmsley multi-terrain 10K - an event where dodging the worst of the usually-muddy (and sometimes cow-pat infested) underfoot conditions can mean the difference between good progress and an ‘entertaining’ energy-sapper of a race. Luckily, the 2019 iteration was run off in warm and dry conditions that went some way to offsetting the difficulty of the nagging up-and-down nature of the course. Jon is now well into the 65-69 age group but he seems to forget he should be slowing down and his finish time of 56.24 was his best since way back in 2013. The time was also good enough for a 176/358 position overall and - by a margin of only 48 seconds - a 2/7 in age.

Last Saturday Jon continued his good form setting his course-best time of 25:55 at the Tees Barrage parkrun where he was also fastest in age.

Where most people would - after a hard 5K race - conventionally rest; lest we forget that Jon is the most prolific full iron man distance triathlete amongst us, the following day he ran for his 6th time at this month's free 10k trail race at Ormesby Hall - another challenging 10K trail-based affair that requires a good bit more mental effort and technical ability than your average road-based event. In spite of most of the ground being firm there were still significant sections of mud and Jon himself describes the course as ‘tough’ - we’ll therefore take it as read that it’s a proper zinger. In spite of the muddy bits - and perhaps more significantly, the parkrun course best of the previous day - Jon racked up yet another top-form performance finishing in 55:14, only a few seconds short of his previous course best of 55:08 set last August.

It more tan bears repeating that Jon’s resilience in the face of his numerous medical issues is inspirational and his performances beggar belief. 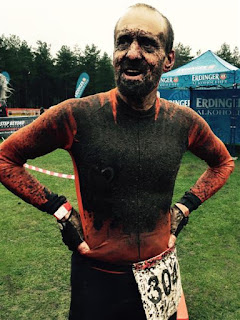