After her solid winter of running Emma returned to the multisport scene a couple of weekends ago and competed in the Clumber Park Sprint Duathlon (Run 5K, Bike 20K, Run 2.5K). This event, together with the accompanying standard distance event (double each of the sprint distances) always attracts a strong field as it’s a qualifying event for the European Triathlon Union’s European age-group championship. A cold and windy day met literally hundreds of competitors leading to some very definite clothing-choice issues. Cool weather duathlons are always difficult to judge as the first run sees a great deal of heat and sweat generation but once on the bike the wind-cooling effect often leaves racers chilled to the bone and really struggling to do otherwise simple things like remove helmets and re-don running shoes in Transition 2. Good job, then, that Emma’s done her fair share of blue-lipped suffering over the years and had that component of the race pretty much mastered. A strong first run saw her in a good position going into the bike leg where, ordinarily, she’d traditionally improve her position. For some reason, though - and in spite of feeling good - the bike leg (pic) just didn’t ‘happen’ for her. Not that it was a poor performance; just that it wasn’t as good as anticipated. Of course, some days it’s just that way - that’ll be racing for you! Using her experience, Emma didn’t let the bike leg deter her and drew a mental line under it before heading out for a strong second run that was good enough to net her a 1:22:53 finishing time, 7/17 position in age group, and 40/89 overall.

Jon continues to juggle medical appointments and a race calendar that many athletes in rude health would be proud of. In the past couple of weeks he’s raced in a half marathon in Northumberland and also in the Stockton Standard Distance Duathlon (Run 9.4K, Bike 38.4K, Run 4.8K). This event, like Emma’s, acts as a euro-qualifier and it, too, traditionally draws a strong field. It’s a fairly unusual event in as much as the bike leg takes place in Stockton town centre and is a multi-lap affair on entirely closed roads. This multi-lap format makes for spectator friendly viewing but can be tricky for athletes: dozens of cyclists trying to occupy the same patch of tarmac at any given point can lead to some ‘interesting’ incidents. Fortunately, Jon avoided any troubles and - again like Emma - used his considerable experience to judge clothing on a bitingly cold day. Though not terribly happy with his performance but given the conditions and technical nature of the course, his 2 hours 46 mins and 38 secs finish is certainly nothing to be ashamed of. 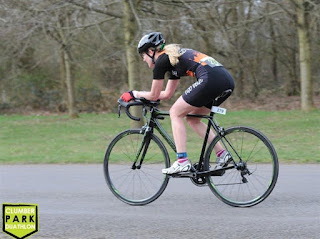