There's been lots of parkrun action up and down the country this past few weeks (plus a couple of runs in France) with the colours being proudly worn far and wide. Mark M, Emma S, Steve W, Steve C, Jon Z, Rosie W, and Mick W have all featured. Most prolifice runner in recent weeks has been Mark M, consistently turning out at Exmouth, but also dropping in on the Cannock Chase event whilst out and about.

It's great to see and worth bearing in mind that parkruns are perhaps one of the best venues at our disposal to sow the seeds of getting people to think about a veggie diet. If you aren't registered in the GV name on the parkrun database and you fancy representin', simply follow these instructions.


Steve ordinarily only really knows full-on-race-face efforts but has been troubled by some historic niggles of late meaning a tentative return to running in the Yarrow Bluebell Trail 10K on 5th May. Given his necessarily-managed effort, Steve reports participating more as a ‘tourist’ than racer (pic) and - in no small part because of this - thoroughly enjoying the enforced slower-than-usual pace; as well as the bluebells, wild garlic and general ambience of the venue and event. For the first time in, well, forever, he also reports having enough in reserve to be able to chat to a few fellow competitors. As well as the banter and in spite of the canter, he still managed to finish with more than a hundred runners behind him. Steve’s currently deliberating whether to commit to the fearsome long-distance Gower Swimrun in July - we wish him a speedy return to full fitness…

Jon is also planning on making a return to longer-distance events and is heading for the start line in the Nottingham Outlaw Half  (half-ironman-distance) event this coming Sunday, where - all being well - his current good form will hold. As per recent blog entries, in 2019 Jon has seen a very welcome improvement to recent years’ performances and this trend held true in the Kirkbymoorside 10K on 5th May. Jon reports his time of 53:20 was only 16 seconds slower than his post-heart surgery PB set at the same event in 2015; and this 53:20 was achieved in cold and windy conditions to boot. Wind is - of course - always a PB-thwarter, but the cold also exacerbates Jon’s exercise induced asthma, too. Notwithstanding having to take a couple of reluctant shots on the inhaler, overall he was 232/439 and 4/13 in the male 65-69 category. 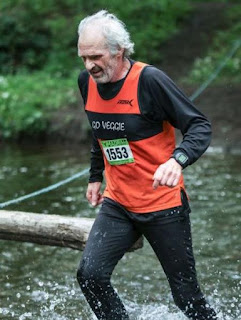