Following an excellent 2018 running season, punctuated by several distance PBs, Rosie W returned to open-event running in early February in the form of the Dewsbury 10K. This event has a reputation for fast and flat which - in these days of running popularity - means only one thing: thousands of runners, elbow-to-elbow, all trying to pick the least-arduous race line at exactly the same time. And so it was on this occasion with literally thousands of colourfully-dressed people literally swamping the entire race-route from start to finish. In spite of the passive-aggressive joust for personal space whilst maintaining maximum threshold heart rate and a non-confrontational smile Rose still managed a sub-50 minute time finishing the column-of-people experience in 49:03.

Fewer people and distinctly more elbow room were attributes of Rose’s follow-up race - and for good reason: few would consider the Langsett Trail 13 as a suitable candidate to knock out a half-marathon PB. This event has a bit of everything - none of it easy. From ankle-snapping rocks to shoe-stealing peat bogs the raw and exposed 426-metre-ascent run from Langsett up to The Marjery Stones and back is well known (and respected) by local fell runners. Race day saw typically windy conditions and a bit of a well-that’ll-be-fell-running-for-you moment with Rose taking a spill and cutting her knee. Failure was not an option, though, especially in the light of two fellow runners rushing to Rose’s assistance and whisking her back to her feet before she even fully realised she was on the ground. In such circumstance, it’d just be plain rude and most un-fell-runner like to flounce off back to the car. Not that Rose - being Rose - would have flounced anyway; indeed we’ve seen race pictures of her lacerated knees in much more perilous states of repair before now. Grit and determination saw her finish 13/23 females overall in a highly credible time of 2:27. 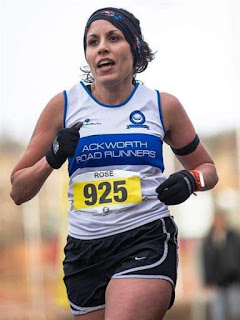