Emma’s had a very busy winter; cramming in parkruns across multiple venues (including one in France) and getting down and dirty in the domestic cross-country scene.

She once again competed in all five rounds of the mainly Leeds-area-based PECO cross country series (pic); no mean feat given that these are all very tough and competitive races and - inevitably - mean cold, inhospitable conditions and tough mental resolve. The temptation to stay in a warm, comfy bed rather than face the arduous task-at-hand is, for sure, a mental battle easily lost.

Showing resolve, Emma conquered the duvet challenge each and every time and performed well at all 5 rounds; her individual results in the senior ladies’ category were as follows:

Consistent finishes meant she achieved a 24/81 series position in her age category and a 161/653 in the female field overall.

Whilst in the cross-country groove, Emma went on to compete in the English National Cross Country Championship held at Harewood House, Yorkshire. Now, this is an incredibly popular event, which inevitably means literally thousands of competitors descending on the venue; some with more time to spare than others. Suffice to say that Emma had an ‘interesting’ time of it and - baulked by hundreds of cars all seemingly heading for the one-remaining parking spot - had to park ‘creatively’ courtesy of a random roadside embankment before sprinting off, layers of race-clothing flapping, in the rough general direction of the number and race-chip muster point in order to be able to start.

After some frantic searching, abandonment of unwanted over-clothing and a sprint towards the start she was at maximum heart rate and still two minutes shy of the line when the starting gun went and the huge field of racers disappeared over the horizon. Accepting she was unlikely to be threatening the podium, she managed to reign in expectations and calm all physical and mental systems down and settle into the race. To her credit, and on a predictably challenging and technical 8K course, she still managed to overtake a good chunk of competitors to finish in a position of 900/1034 overall in the ladies’ ranks.

Given that the winter had seen Emma race herself to a good level of fitness, and taking the view it was a shame to waste the race miles in the bank, last weekend she entered the Norton 9 mile road race. This race is a particularly tough one and features relentless and wearing climbs and descents; some notably steep. In spite of the tough nature of it, Emma reported enjoying the race and managed a 1:20:52 course PB to boot; almost four minutes quicker than her last effort in this same event a full ten years ago. Her effort was good enough for a 15/35 position in age category and 91/203 in the female field overall. 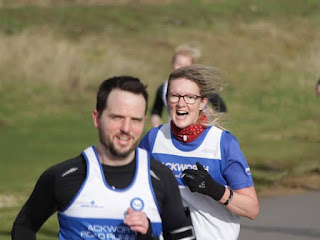