Steve C does not hibernate

Following on from his exploits in earlier reports, Steve successfully completed the final (3/3) event of the Mad Bull Torch Challenge series with an impressive 11th position placing and, in doing so, did enough to achieve the best aggregate time across all three events in his age group. Steve’s series win was helped in no small way by cunning race craft. Years of experience saw him make a purposefully controlled effort on uphill sections, going just quick enough to keep his nearest rival in sight, before unleashing his well-known brain-in-neutral, barely-in-control-windmill-legs effort down the definitive downhill sections.

Though proving successful in the series, this tactic ensured Steve’s legs were well and truly trashed for his annual bash at the Hit The Trail 5 mile cross-country event the following morning where he achingly and strainingly ‘achieved’ a PW. You win some…

Having (seemingly) recovered, a couple of weeks later Steve took on the LDWA's Hebden 22 miler event but his event was foreshortened by having (not for the first time) to tend to a fellow competitor who had a nasty tumble down a small gully through a wooded section resulting in a head gash. By the time Steve had him bandaged up and delivered to a checkpoint the cold and fatigue had crept in so he took the less arduous option of diverting to the 15 mile route and jogged home. In spite of the distraction (and perennially painful knees) he reports enjoying the event overall (pic), reporting a muddy run on tracks and trails at lower altitudes with mist and settled snow on the tops.

In other news, Steva and Britta - in spite of having some of the worst suffer-fest experiences either have endured - they have entered the full distance SwimRun on the Gower Peninsula in July. Suffice to say both are looking forward to - and dreading - the day in approximately equal measure. 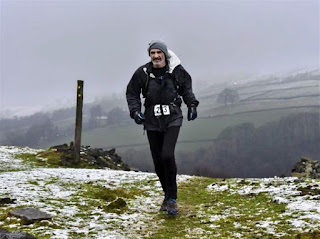