Simply fitting in and working around significant medical appointments that would leave most people catatonic, Jon continues to amaze by not only racing, but also confounding numerous consultants by doing so rather well.

Jon did the Ormesby Hall trail 10k on 23 September where he reports a slower-than-hoped-for time but then reveals that he was tired from mostly sleepless night the previous night (caused by pain from flu jabs) and that he had run as hard as he could in a parkrun the previous morning.

One week later, Jon did the Redcar half-marathon for his fourth consecutive year where he reports working really hard and just - by 9 secs - beating the 2 hour mark.

Rose has (or had until now, anyway) a secret weapon in the form of a sophisticated indoor-bike trainer, which seems to be having a very positive effect on athletic performance. The training regime seems to be translating into extremely credible run results.

On 12 August she competed in the Askern 10 mile road race, an event that draws many very serious road-racers and which is known for it’s tough hills. A PB of a 1:24:48 finish and an overall female position of 35/103 speaks for itself.

Just about one month later, and really only using it as a preparation race for her upcoming Kielder Marathon, Rose took on the Vale of York half marathon where she knocked out an almost casual 1:50:57.

By 7 October, the ‘main event’ rolled around - the aforementioned Kielder Marathon. Now, this is one difficult event and definitely not somewhere to head if your goal is to achieve a Marathon PB. Much of the course is run over loose gravel and similar energy-sapping underfoot conditions and it just rolls relentlessly on, and on, and on all the way around Kielder Water for its entire 26.2 miles.

In spite of hitting a really rough patch at around the 19 mile mark (where Rose reports that simply ‘everything’ hurt) she battled on to a truly impressive 4 hours 52 minutes 16 seconds finish - and in the process confounding all expectations achieving a PB on a course where a PB should not really be a realistic aspiration. 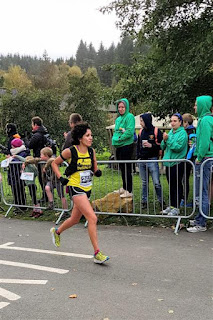