Always up for an event with a twist (as long as it’s off-road, hilly, technical and preferably including extremes of weather), Mick recently engaged in a full-on effort at racing a narrowboat. Sounds easy: but isn’t. The Man V Barge essentially requires competitors to frantically hammer ‘over the tops’ between the Pennine towns of Marsden and Diggle, whilst the barge pootles sedately between exactly the same points - but through the Standedge Tunnel: the longest, deepest and highest canal tunnel in the UK. The total run distance is described as 5 miles-ish making. Mick’s 37:58 mighty impressive over such terrain, indeed the time was good enough for 12/180 finish overall.

But that was a mere warm-up. In early September Mick returned to the Peak District to revisit last year’s demons in the form of the infamous Bullock Smithy, a 56 mile yomp through the Peak’s very harshest terrain. As if the event isn’t brutal enough, this year’s race took place over two of the warmest days of the long-hot summer. Unsurprisingly, hydration was a massive issue and Mick reports that no matter how much he drank, he was in a permanent state of off-putting thirst. Again unsurprisingly, hydration played havoc with digestion and - well - we’ll spare the gory details… Such was the difficulty that 70 experienced athletes retired or were pulled from the event. The unexpected attrition gives context to Mick’s 3.00am-ish finish (pic) in an awesome time of 14:51:00 - good enough for a supremely-credible 31/223 overall position.

Emma, meanwhile, returned to the multisports scene to have a bash at the Darley Moor Duathlon (Run 5k / Bike 20k / Run 2.5k). Though the event was held in the benign surroundings of the traffic-free Darley Moor Race Track, the aforementioned long-hot summer decided to put something of a dampener on things and the event was run off in cold, torrential rain complete with a squally bluster; the first bad weather of the entire summer. Though frozen through for the entire duration, Emma used her bike-handling and pacing skills well to trot out a 3rd-in-age finish in a total time of 1:16:31. Of course, it was sunny and warm the following day… 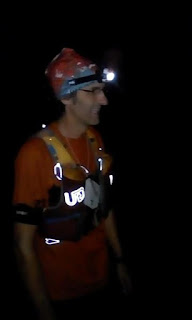