Undaunted by the suffer-fest that was the Breca Buttermere SwimRun, Steve C and Britta W followed up on the race format to compete in the Breca Coniston Sprint event. As before, this race format includes several open water swim legs that are connected with several wetsuit-clad fell-run legs (or vice versa depending how you see things). Steve reports that, if anything, this event was even harder than the Buttermere event, mainly because the water in Windermere, Rydal Water and Grasmere was simply debilitatingly cold. The pic shows Steve in action and he’s the first to admit he was suffering - genuinely medically suffering - at this point. To give an indication of just how bad things were, Steve reports thinking that Britta would have been up for quitting had there been any suggestion of wavering and looked in a genuinely rough state by the finish. Imagine his surprise, then, when Britta was left to be whilst medics immediately pounced on him instead in a blind rush to get him out of his wet gear and to stabilise his body temperature. His core was 31 degrees at the finish. Almost unbelievably, the pair are considering further SwimRun forays…

Back on dry (well dry-ish) land, Steve has now also taken on a couple of rounds of the Mad Bull Torch Challenge, a night-time trail / fell run series held around the Rivington / Pike Fell area of Lancashire. Unsurprisingly given the location, the going is tough with steep ascents / descents, rocks, mud, ice, peat, roots, and all manner of other ankle-snapping substrate to contend with. Now, this kind of stuff is tough by day, but by night - with only a headtorch separating competitors from total blackout - it’s not hard to imagine how much more serious things get. Notwithstanding - and in a refreshing change to the current zeitgeist - the race briefing for the latter of the two rounds saw the race organiser stating simply “'Watch yourselves, it's bloody icy on the paths near the top”.

Of course, Steve is no stranger to such madness and as things get tougher he just gets better. In the first round he took an age group win and in the second did enough to stand a chance of an age-group series in the event he can pull out a good performance in the last round of the series to be held on 5th January 2019. 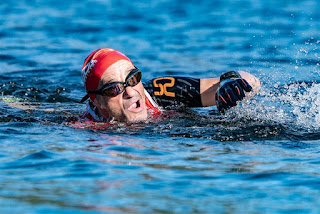