The Sundowner middle distance triathlon (S1.2M / B56M / R13.1M) held annually near to York traditionally attracts a large field of athletes and is a highly competitive event.

That Jon’s determination to work round ongoing serious medical issues saw him on he start line for this event is astonishing. The fact that Jon is not content to simply complete - but to seriously compete - is just inspirational.

And seriously compete he did. After emerging from the swim section approximately 10 minutes down on the leader in his age group, Jon steadily regained time on the bike section and also made further time in T2 meaning that he emerged on to the half-marathon run section only 29 seconds down on the lead.

Being a seasoned long-distance competitor Jon is extremely skilled at pacing and nutrition strategy and this - as is so often the case - paid dividends. Within only short period of time he had taken the lead and at the end of the piece finished with an emphatic win. Total time taken: 6hours and 44 minutes. 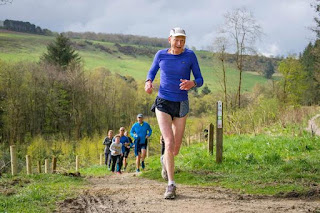