On 11th August Steve C and his vegan training / race partner Britta W set about a multi-discipline race with a difference in the form of the Breca Buttermere SwimRun Sprint. As the name suggests, the event is made up of swimming and running: all fairly straightforward so far. The twist begins in the form of the number of separate swim and run sections involved, ie no fewer than16! The format requires that competitors run a section, swim a section, run a section… and so on; until they finish or can take no more. The twist continues in the form of some truly tricky and head-numbingly cold swim sections and some genuinely hard fell running sections - all done it wetsuits. Total race distance for the ‘sprint’ is 19km comprising 15.7km of run and 3.3km of swimming. The expected course completion time of between two and four hours (for fit athletes) gives some indication of the nature of the beast.  And if you’re not already persuaded, a glance at the course map or route card brings the true horror to life.

Well, predictably, Steve reports quite a suffer-fest with rough and cold water crossings serving to totally numb both mental and physical function, and make exponentially worse what would be a tough trail race (even without running in wetsuits) in its own right. In spite of the hardships, the pair finished pretty much spent in 3:52:57 in 19th position in the mixed pairs category and - having 'enjoyed' the hardship so much - promptly entered the upcoming Coniston-based SwimRun event.

As a ‘warm down’ they both also did the Quarry Bank 4.5 mile trail race only a few days later. Hmmmm. 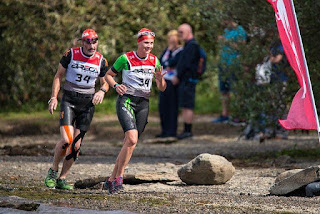 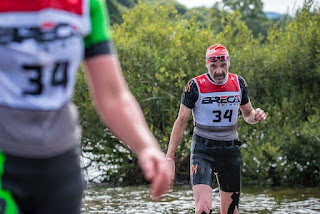 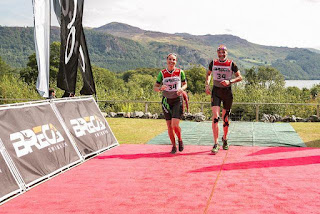