Partly as penance for being ‘retired’ from the V3K, and partly because he just enjoys competing, Steve C dusted off his bike and, last week, raced in the final round of the Capernwray Sprint Triathlon Series. This series consists of 3 events run in June, July & August; each taking place on Wednesday evenings at 7pm. Each event is a 500m open water swim in Capernwray Quarry, followed by a 20k road cycle and 5k out and back run on the Lancaster Canal towpath.
The drizzly conditions on the evening did not deter Steve one bit but the 150-strong wave of swimmers - all vying for exactly the same bit of quarry water - did cause some predictable bumping, ducking and general hindrance-of-progress issues. Steve is no stranger to tough swims but by his own confession has been a stranger to his bike for the past 11 months.

In spite of the lack of bike-specific training Steve nonetheless didn’t find the ‘lumpy’ route too difficult and hit the run leg along the pretty Lancaster Canal towpath (pic) in reasonable shape and was able to use his running strength and experience to good effect. His competitive run paid dividends and resulted in a 3rd in age group

In other sprint triathlon news, on 15th July Steve W raced in the Great Britain Age Group Championships (Swim 750m / Bike 24K / Run 6K). This year the event was based around the Woodhorn Museum in Northumberland and featured a (very) weedy swim, an ‘undulating’ bike, and a trail run finish.

Run in searing temperatures, the swim was a single-wave affair, which - much like Steve C’s swim - was spent bumping and jostling with hundreds of fellow racers whilst also getting distractingly snagged in a soup of weeds and algae that had flourished as a result of the long hot summer. Emerging from the water draped in various forms of vegetative matter Steve made a few places in the 300m run to transition and then a few more on the tough and technical bike leg. The run was a different matter where a couple of niggling injuries and an associated lack of run-training saw him struggle to hold position and finish in a disappointing-for-him, podium-denied 4th place. 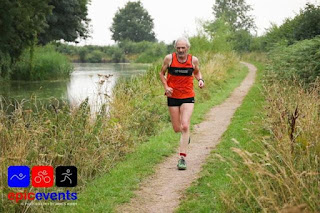