The Transvulcania Ultramarathon is considered to be one of the hardest mountain-races in the world. The total route has a length of 73.3 km (45.5 mi) with a cumulative elevation gain of 4,415 m (14,485 ft). The race has taken place annually place on the Canary Island of La Palma since 2009 and attracts the world’s best ultra and pure-mountain runners.

As well as the original (and brutally fearsome) ultra itself, additional races are included in the whole Transvulcania Ultra Festival and it’s now possible to enter:


Several years ago, Mick and Rose W hatched a plan to one day try to be a part of the whole phenomenon and, on 12th May 2018, at the culmination of co-ordinating months of serious training, meeting stringent qualification criteria and sorting out some pretty complicated logistics, almost disbelievingly found themselves on the pre-dawn start lines of the marathon and half-marathon respectively.

Mick and the Marathon

Mick started the marathon very, very conservatively and the strategy proved a good one. As daylight broke and the temperatures, inclines and terrain worsened, he picked off competitor, after competitor… after competitor. In an almost unbelievable demonstration of pacing he did not get overtaken once in the whole 6hrs and 46mins it took to reach the finish line and his incredibly impressive 192/816 position overall. 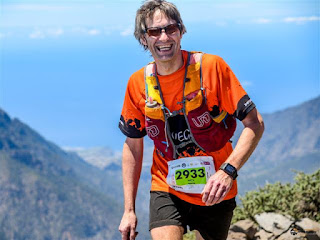 Rose and the Half

Though shorter, the half-marathon involves underfoot condition just a tricky as the marathon and - just for fun - actually has more elevation gain than the longer event. Rose herself takes up the half-marathon story:

“Initial thoughts… CAN I DO THIS?

I was nervous and apprehensive boarding the transfer bus from the hotel to the start of the race; this was my first time taking part in any organised event outside of the UK. Leaving the hotel at 5am meant that it was still dark and cold. There was no street lighting and there were lots of sharp turns. This made for an ‘interesting’ journey. Luckily the bus driver seemed to know where the invisible-to-me roads were.

Approaching the sea level start to the race at Faro de Fuencalienta, the already-underway ultramarathon participants could be seen in the darkness, lighting up the hillside with their head torches. Snaking around the landscape, they were a formidable sight to behold.

The start of the 15 mile ‘half-marathon’ was full of multi-lingual chatter with people nervously performing stretches. It was very cold waiting for the start and for the light. In my nervous contemplation, it was slightly surreal to be surrounded by the noises of a very enthusiastic race director, hyperactive participants, and rock music booming from what seemed like a thousand loud speakers.

The start was a very short road section followed by single tracks where large crowds of local people lined the route and were enthusiastically cheering and shouting words of support: a very memorable start.

As we progressed, terrain varied enormously and included narrow, single-file never-ending switchbacks, wide open lunarscapes - and everything in between. Some parts were open and rocky, other parts shaley slate, where - sinking ankle deep in scree - it felt like (and I often was) running on the spot. Some sections I was able to run, some sections I had to walk; and there were still others that meant I was literally on hands on knees, digging deep, and having to keep a positive mind and just keep moving forward.

Some ‘normality’ resumed with a lovely section through the little town of Los Canarios where, against a backdrop of festival music, people lined the streets clapping and cheering. A really nice touch was a commentator who mentioned every single runner as they went through; it was, altogether, a very memorable and lovely place.

Just when I felt like every bit of terrain possible had been covered, at 12/13 miles I was suddenly in a forest that was cooler, damp, wet and muddy and it struck me that I could have had this identical experience - minus the massive logistical efforts involved - had I stayed at home.

Still wrestling with sheer oddity of plunging from a sun-washed volcano to an autumnal-north-of-England type forest, the finishing line at El Pilar was a very welcome sight.

Final thoughts… THANK GOODNESS I GOT ROUND!”


With a time of 4hrs and 58mins and a position of 294/487 overall, her achievement was just brilliant and unquestionably considerably better than simply ‘getting round’. 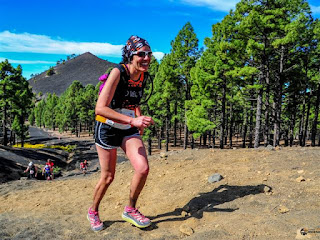 For those inspired, Mick and Rose heartily recommend the event and commend both the stunning location and the brilliant organisation. The organisers are so accomplished that not only do they take care of fiendishly complicated competitor transfer and race logistics, but are even able to co-ordinate the supply a short personalised video to each and every competitor.