The past couple of weekends have seen Steve W moving back towards form in his preferred discipline of sprint distance triathlon.

After a shock-to-the-system start Steve has since competed in both the Grantham and Ashbourne sprints. Age group wins and a 6th and 14th overall have been the result. Good swim and bike legs have been a feature and in the latter race involved some serious hills and twists in the foothills of Derbyshire’s Peak District (pic). Steve reports his run is still not at its best but at least has an idea where improvement can be made.

Steve C shrugs off injuries. It just is how it is. In the recent Mad Hatters’ 5 mile trail race in Stockport Steve ominously described running the hills with sore knees, one of which he almost nonchalantly describes as “giving away by twisting”. With ailments that would have most in intensive physio and laid up on the couch, Steve just gets on with stuff. Hard.

Watch this space, Mick and Rose are just back and starting to recover from the beautiful island of La Palma having taken on the Transvulcania full / half marathons. 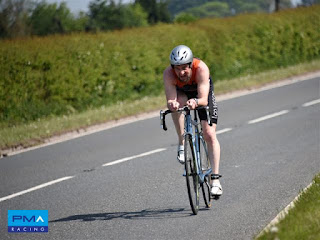