The multisport season is underway and three club regulars have been out and about in the colours.

In spite of ongoing health issues which literally see Jon uncomplainingly mixing major surgery with racing (and all the other aspects of daily life) he continues to confound with two second places in age group. The first came on 8th April at the Durham Duathlon (5K off-road run / 25K bike / 5k off-road run) where underfoot conditions in the run sections were properly 1970s-school-cross-country-style muddy.

Steve appeared bleary-eyed from winter hibernation on 29th April and competed in the Brigg Sprint Triathlon (400m swim / 20K bike / 5K run). A windy and very cold late-April day made for tough going and a slightly slower performance than last year’s effort. In spite of some disappointments, Steve acknowledges that his winter hibernation regime is perhaps not optimised for athletic performance and reluctantly settled for the 12th overall position he managed to bag.

The 5th May saw Emma racing (pic) in the super-competitive Clumber Park Sprint Duathlon (5K run / 20K bike / 2.5K run). The event is always well attended but this year it was also an official qualifying event for the 2019 ETU European championships and understandably, many quality athletes turned out in an effort to qualify. Emma had a controlled first run, a strong bike leg (check out the size of the gear she's pushing) and then a self-confessed wobble-to-the-finish last run but in spite of running out of beans managed a fantastic result of 3rd in age group; only just missing 2nd. This performance would have seen Emma qualify for the 2019 championship race had she registered her intent to qualify. Unfortunately she hadn’t but - bolstered by the result - is now eyeing up another qualifying race in a couple of weeks’ time. We await the result with interest. 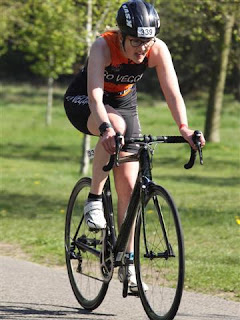