Steve has done three sprint triathlons in recent weeks, including the English National Age-group Championship held in Surrey. A couple of age-group wins and decent overall positions in the sprints leading up to the ‘main’ event helped with confidence but - as is often the case with racing - form can elude without explanation or apology. In short, Steve did not perform at his hoped-for standard and - though still managing a 6th place finish - was disappointed with his reported ‘dead-legged’ performance.

Bouncing back to some degree, last weekend saw him step out of his usual sprint-based comfort zone and compete in the Leger Man middle distance event (swim 1900m / bike 80km / run 20km). Steve reports that he (mysteriously) swam above his usual standard and knocked out an impressive (for him) 31 minutes for 1900m before heading out on a measured-effort bike leg and then the run. Unsurprisingly, given his lack of distance training and the searing temperature on the day, he suffered badly during the 20km run effort but just managed to fend off hideous leg cramps long enough to hold on for an age group win and reasonable overall finish in a time just under 4hrs and 30 minutes.

Meanwhile, Steve C’s endurance efforts continue to make even middle-distance triathlons look fairly ordinary; his latest quest involved a four-consecutive-days-of racing event in the form of the Tour of Tameside.

This series of races changes format fairly frequently but currently consists of a Thursday-to-Sunday effort involving: the X-Trail 10k, the Hell on the Fell 6 mile fell race, the Hero Half Marathon and (finally) the Dr Ron Hyde 7 mile road race.

And yes, they are all as bad as they sound.

Steve (pic) reports taking the first event pretty steadily due to a combination of injury-strewn preparation and the knowledge that things get substantially tougher as the event unfolds. Day two saw an equally circumspect start but - egged on by a two kilometre downhill finish and feeling pretty good - he threw caution to the wind and went for it; picking up a third in category (including those ‘visitors’ who were just competing in that one single race).

But trashed his legs in the process.

Day three, then, proved predictably rough with him hitting the proverbial wall at about 15K and a wobble home to the finish. Notwithstanding and in spite of fears (and probably down to years of mega-mileage), Steve recovered pretty well over Saturday night and managed a well-paced effort in the final ‘lumpy’ 7 mile road race to finish the overall series a rather splendid 3rd in category. 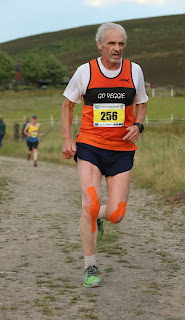