The prestigious PECO Cross Country Series has now run its last two rounds, drawing to its winter 2017/18 conclusion with:

Emma S has been the stalwart Go Veggie; the only GV member this year to complete all five events. Emma’s consistency through the mud has been enough to enable her to slip-slide her way to a top ten in age group for the overall series.

Run on a bitterly cold and snow-laden 4th February 2018, The Mickleden Straddle fell race held in the northern Peak District is described by the organisers as:

Good job, then, that Mick W (pic) has managed to acquire a hefty wedge of such experience this past couple of years and was, on the day in question, deemed qualified to line up alongside 200 or so other gaunt-looking masochists.

In fact, that should read out-of-control descents because Mick, well past the two-hour mark and on distinctly wobbly legs, took one for the team with a headlong slam into a pretty solid chunk of Derbyshire hillside. Bruised and leaking, Mick nonetheless regained some composure and made the finish with a 78/194 position overall. He even managed to keep his well protected man-bun in place.

Again, parkruns have featured heavily in GV activities with several members hitting a good number of locations. Steve W has re-appeared from winter slumber and is currently using them for a bit of high-end-heart-rate prep for the upcoming triathlon season. Steve has advanced an age cohort this year and is so far making the most of his new-found youngster status, taking 4 age-category wins on the trot. 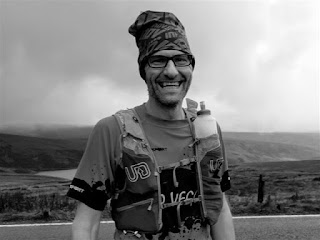