In spite of freezing conditions, much winter dankness and tons of mud, the usual cross-country / trail runners have been out and about slipping and sliding to some very good performances.

We’re well into the prestigious and very competitive PECO XC League for the 2017-18 season with the following races already completed:

Jenna G, Emma S and Mick W have been the mainstay competitors with Emma - to this point - being the most frequent team ‘counter’.

On 16th December Steve C ran the Elsecar Trail Half Marathon and reported a very easy route apart from some sections that were well and truly frozen and resulted in more of an involuntary skate than a run.

Undeterred by the slipping-and-sliding, on 7th January Steve C was again in trail-running action taking on the Belle Vue Racers Hit The Trail 5 miler set in the pleasant surroundings of Reddish Vale Country Park, Stockport. Steve reports a similar frosty experience but with the added fun of some muddy section thrown in for good measure. In spite of the tricky conditions, Steve still managed to beat his last run at this event (in 2016) by 15 seconds. Here’s hoping 2018 will be injury and illness free for him and bring more improved performances.

The ever-popular parkruns have featured a lot in recent weeks with many Go Veggies hitting many venues. Stand out itinerant has been Emma S who, in the course of one week only - and thanks to the ‘doubles’ on offer over Christmas - managed to run in local events around West Yorkshire as well as Druridge Bay in Northumberland (pic), Anlaby in Hull and at the Humber Bridge Country Park in East Yorkshire. Serious motivation! 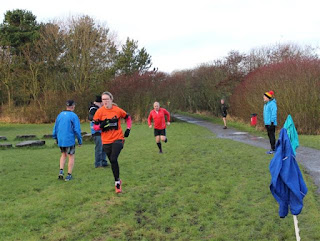