In preparation for his upcoming Vegan 3K Ultra,  Steve C was joined by Mick and Steve W to recce the latter half of this absolute killer of a course - over which competitors have to take in 15 peaks higher than 3,000 feet. Add to the mix many more peaks between 2000 and 3000 feet, the Welsh weather, the (often) moonscape terrain and the result is maybe one of the toughest events over the full 26.2 mile marathon distance to be found anywhere. It took the Steve’s and Mick almost four hours to cover the latter 13 miles - and this is probably the easiest half…

Unbelievably, just two days after this Welsh leg-wrecker, Steve C was back on the fells to compete in the 20 mile version of the LDWA’s Hebden Boundary event. Just one shower conspired against competitors, who otherwise enjoyed good weather and splendid Pennine views. Steve reports having a tough but enjoyable run with one horrendous ascent, some proper high-ground mire, and a couple of more benign sections including pleasant valleys and riverside trails to take his mind off the pain. Confirming he is, in fact, human - Steve admitted his legs were a bit sore afterwards.

In shorter but no less brutal fell-running action: Jenna G and Mick W raced the Trunce last Monday and both smashed it. Jenna rarely fails to spot even the best-hidden course photographers (pic) and continues to get faster and faster. She only (very) narrowly missed a sub-40 minute finish, whilst Mick again snuck under the coveted 30 min Trunce marker with a 29:59. Jenna was 32/114 overall in the female race, Mick was 17/86 in the MV40-49s.

Jamie L, like Jenna, is showing some real potential and recently achieved a sub 45 min run in Worcester AC’s Pitchcroft 10K. Jamie reports that he could most definitely have pushed harder and beaten his 56/162 overall position and 44:53 time. Effective pacing is a tough one but Jamie’s clearly determined to crack it.

Both recovering from bouts of poor health, Jon Z and Emma S recently tried their legs and returned to the 10K distance, Jon competing in at Marske-by-the-Sea event near Cleveland and Emma at Askern, South Yorkshire. Neither were totally happy with their performances, but both fully understand that sick bed to10K PB takes more than a little time to achieve. They’ll be back…

Steve W had serious race-face on for the recent Southport Sprint Triathlon (750m swim / 20K bike / 5K run). The event was a qualifier for next year’s ETU Age Group European Championship so wasn’t one for dawdling. Steve had a reasonable (for him) salt-water swim, his usual strong bike and a decent run and did indeed perform well enough to qualify for a place on the start line of the 2018 euro championship. Whether he takes his place is a different matter. The timing is bad and the event is in … 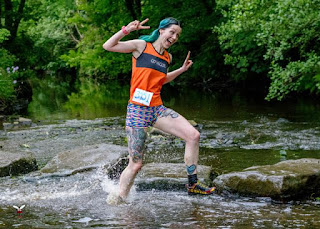