Determined not to be out-suffered by Mick W, Steve C was back racing on the Peak District’s uplands on Sunday 7th May when he took on the 23mile version of the LDWA’s Stanage Stumble. The event organisers advise that the event comprises a “Challenging route over , , Stanage Edge - returing via Redmires Moor, Rudd Hill and mainly off road on good tracks and paths”. The event organisers are also known for understatement and for Steve himself to report “surprisingly little flat”, you just know it was hard. At least the weather played ball offering fine and dry conditions giving great views throughout the entire five and a half hours it took Steve to complete the course.

The same day saw Steve W back in sprint triathlon action, this time involving a ‘rolling’ bike course across the Yorkshire Wolds around Driffield. A surprisingly decent (for Steve) 400m pool swim was followed by a strong 19K bike leg (pic) and a hang-on-in-there twisty-turny, multi-lap 5K run which - all combined - resulted in an age group win and a thoroughly reasonable 10/302 overall. 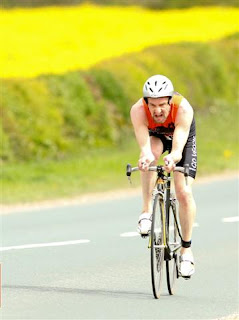