Steve W took to the wholly esoteric world of medium gear (72”) time trial racing again on 8th April with a race over 25 miles on a known fast course near . A good day with only a light breeze saw Steve giving the event his best go and almost making the sub-hour-medium-gear-25 hall of fame (a very exclusive club) with a 1:00:34 effort. Compounding just missing the hour mark was the relative disappointment of missing the podium too with a 4th place overall. Steve reports he wrung himself out and given an inability to be 30 years younger that some ‘bike tweaks’ may be the only way he’ll ever crack this one.

Steve C consistently manages to find the strangest (and toughest) events. Swimming in Lake Windermere in April is challenging enough: swimming in in April after nightfall is a different sphere of challenging entirely. In a wetsuit designed for swimming, a couple of kilometres in a temperature of only 9 degrees Celsius was only ever going to be a rough experience and - even following a winter of indulgence and a subsequent layer of ‘natural insulation’ - the halfway point saw Steve shivering uncontrollably and violently. In that way that he can, though, Steve put the pain to one side and finished the event to a reward of a roaring beach bonfire and steaming mugs of cocoa. We don’t know if he knows you can just buy cocoa at the supermarket.

Mick W is undoubtedly inspired by the crazy world of Steve C and is becoming something of a pain-meister himself. The are a renowned challenge to walk; so why not have a fell race over them? Well, on Saturday 29th April nearly a thousand people did - and Mick was amongst them (pic). The conditions - which can be notoriously foul - at least didn’t conspire against competitors on this occasion, and even allowed each peak to be clearly viewed from each of the others for the entire race duration. Now, this can be a very good or - depending on mental toughness - a very bad, thing. Running over hideously challenging terrain for an hour, yet seemingly getting no closer to the next lung-bursting 2000 foot ascent can play havoc with motivation. Mick was well prepared, though, and slogged it out to a 437/699 overall finish in a time of 4:37:35. Almost three hundred competitors didn’t make critical time cut-off points and were pulled from the race. Putting Mick’s finish into further perspective, this is not an event that is open to any entrant; competitors have to prove via previous results that they are capable of running the fells so each and every entrant is a proven-capable endurance runner.

During the event, Jenna G, in support of Mick, made her own big-hill debut and blasted up (and back down) Ingleborough to offer some much-needed humorous abuse. Serious fell running seeds may well have been sown…

Steve W made his 2017 multisport debut with an appearance in the Ancholme sprint event (400m swim / 20K bike / 5K run) on Sunday 30th. A result of 2nd in age group and 6th overall belies the fact that until the very morning of the race Steve wasn’t sure if he’d even make the start line. A huge bike crash only two weeks previously saw a very battered and bruised Go Veggie really struggle in the run with a performance that was at least a minute slower than would ordinarily be expected. 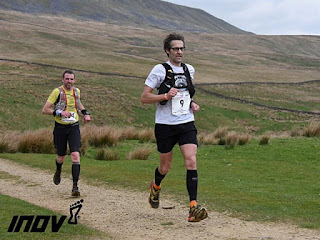