The stalwart and almost-always-muddy quartet of Jenna G, Rosie Wigg, Emma S and Mick W made their final cross-country appearance of the season and - though battered, fatigued and bruised - helped their first claim running club (Ackworth Road Runners) to decent overall positions in the final reckoning for this club-based competition. Ackworth ladies did particularly well and retained the coveted status of premier division team. Individual results in this final round were: Mick 128/389 in the men’s event overall; whilst in the women's race, Emma placed 110, Rose 142, and Jenna 161/267 overall.

Steve W made a return to pure-cycle-race competition for the first time in about three years and also made his 2017 race debut. Steve has, over the years, focussed on medium-gear cycle events as an enforced high-intensity speed-training session in preparation for multisport events.

Because gearing is restricted to only 72" (read very low), competitors are forced to rev like crazy to achieve any kind of decent speed. It’s a bit like racing a car stuck in second gear - except harder as you can’t just sit there and keep the throttle pedal jammed wide open.

Relying on human power, it’s fair to say that keeping an average cadence of well over 120rpm for the entire duration of the race is hard on legs, cardio-vascular system and nether regions. In spite of the early-season shock to the system, Steve (to his genuine surprise) scored an overall event win.

Determined to demonstrate to Steve that medium-gear events are for softies, Mick W insisted on some fraternal support and dragged our still-sore time trialist to the fells of the to run the infamous Edale Skyline route. Whereas Steve is always suspicious of run-routes that allow a bird’s-eye view of people hang gliding, Mick is preparing for the upcoming Three Peaks Fell Race so arguably needs to endure this kind of masochism.

Suffice to say the promised ‘potter’ turned into a predictable day of attrition with our heroes barely able to climb back into the sanctuary of the car at the day's end. Over four hours of ‘pottering’, sometimes through endless peat bogs and boulder fields - which also included the small matter of almost 5000 feet of ascent - led to the slowest sprint finish known to mankind. The fact that the 'sprint' was accompanied by hysterical laughter at the farce of - in reality - staggering helplessly at about 3mph didn’t help.

This event saw Rosie Wigg make her multisport debut and, cutting a long story short, she thoroughly enjoyed it. The event is very popular, set in a fantastic venue and it’s also traditionally a qualifier for European and / or World Age Group championships. A nice low-key event to make a debut at, then! Unfazed (or not too overly-fazed anyway) Rose kept her composure and focus during the entirely-new-to-her transitions phases of multisport racing and also coped pretty well with the run-to-bike-jelly-legs scenario that really can take some getting used to.


Rose wasn’t the only Go Veggie present as Emma S, too, had decided to give the event a whirl. Emma (pic) is a seasoned triathlete but has only ever done one duathlon before, a very long time ago. In spite of a lack of run-bike-run experience she continued her good form of late and finished in a very good time of 1:22:24, which was good enough for a 280/437 overall female finish. Rose wasn’t too far behind and clearly has some multisport potential. Lending perspective, the quality of the field at this event, being a Euro-championship qualifier, was very high and the GV results - in this company - were very credible. 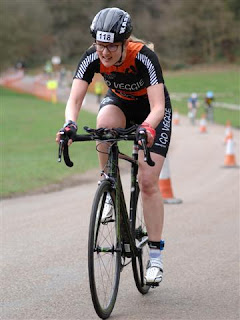