After last year’s heroic life-saving effort, which itself followed several year’s worth of eventful ‘man-down’ experiences in the Anglezarke Amble 25 miler, Steve C was thankfully able to report that Saturday 11th  February’s running was a relatively boring one. ‘Relatively boring’ still saw Steve and fellow competitors running pretty-if-treacherous snow-covered sections of the uplands, and also dropping calf-deep in trainer-swallowing mire once below the ‘permafrost’ line. The fact it took Steve five full minutes to undo his shoelaces on completion more or less sums up just how much this grueller takes out of its truly hardy competitors.

Almost unbelievably though – and once again demonstrating his unfathomable endurance – Steve was still able to take Len round the Manchester canicross 5K event at Pennington Flash the very next day. Or rather the other way round: a fresh-and-keen Len and a sore and tired Steve most definitely saw Len very much in charge of pace-setting.

In cross-country news, rounds three and four of the Yorkshire-based PECO series have once again seen Jenna G, Mick W, Emma S and Rosie Wigg battling it out on behalf of their local first claim club (Ackworth Road Runners).

Round three was held at , north and was, as this venue nearly always is, a muddy affair. All ran solidly and all finished high enough in Team Ackworth’s finishing order to count as scorers for the team. Stand-out performance of the day was Emma’s (130/344 overall position), who pulled one out of the bag to score for the female first team. Jenna and Rose finished close behind in positions 154/344 and 156/344 and lodged solid points for the B team. Mick had his usual solid run and finished 169/460 overall; scored for the male first team, and somehow, mysteriously, managed to end up with bloodied legs – ahhh, the joys of cross country.

Round four of the series moved to , to Barnbow fields, and continued with the theme of mud but also featured a few nasty hills for added entertainment. Mick had, by his standards, a disappointing race finishing in a post-nasty-virus 142/394 overall position. Rosie Wigg made the top half of the female field overall with a 140/285 finish whilst Jenna, just about 1 minute behind, finished 157/285. These are very respectable results given the quality-of-field at PECO events. These are not races for people who can’t face a bit of rough-and-tumble.

The fifth and last of this winter’s series takes place this coming weekend, good luck to all GVs entering.

Finally, as is frequently the case, Go Veggie has been well represented at parkruns up and down the country with Emma S adding a new event (and an age-group win) to her tally when she took part in the Aldenham event near . Emma reports the event is well organised, friendly and still very low key. 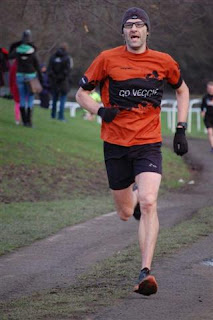