Jon Z and Steve W took on the infamous Outlaw full distance triathlon on 24th July and we’re pleased to say both finished.

The event is a true grueller and features a 2.4 mile swim, a 112 mile bike leg and a full 26.2 mile marathon run to finish. It was especially tough for both Go Veggies but for entirely different reasons.

Jon Z is a seasoned long-distance triathlon campaigner with an enviable results record. This, though, was his first full-distance event completed since major medical issues and his truly outstanding finish in the 14 hour slot is, we think, unique.

In Jon’s own words:

“In late July I attempted my life's ambition since my heart surgery in 2014. A full ironman distance triathlon (over 140 miles) in . It would be my tenth such race - and my fourth such race at this venue - but my first since 2012 before my stroke, my pacemaker, my very major open heart surgery and, more significantly, before my heart became highly inefficient.

There were strict cut-off times for end of swim, end of bike and also end of run. I was very, very concerned about missing the bike cut-off. (Most races of that distance allow 10 hours 30 mins from race start to finish bike but this race allowed only 10 hours. Also there was an intermediate bike cut-off time at 75.5 miles, as well as final one at 112.6 miles.)

This race has always been shown on TV in an hour programme a few weeks after the race. Although, of course, the focus is on the expected first three men and women the TV production company also interviewed and filmed me.

There is no way of knowing for sure but I may be the first person to complete an ironman distance triathlon with a pacemaker and prosthetic heart valve.

If anyone is interested to see the programme - called the Outlaw triathlon - and it is due to be broadcast as follows:

Steve W, on the other hand, is anything but a seasoned long-distance triathlon campaigner. It’s the first time Steve has taken on anything approaching such a distance and his goal was simply to complete the course. In spite of novice status, a decent swim and well-paced bike leg initially saw Steve both comfortable and well up the leaderboard but, cometh the run, cometh the downfall. Steve reports that though mind and cardiovascular system were willing, 30 minutes into the run it was all about the legs, ie they just would not work. Notwithstanding the huge time losses though, he still managed to finish in the 11 hour slot and in the top 10% overall. 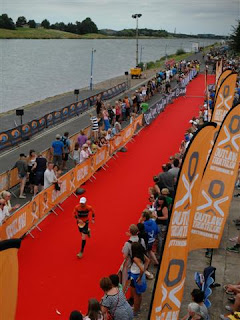