There’s been plenty of Go Veggie activity these past few weeks in spite of the holiday season spreading members far and wide.

Steve C has continued competing in spite of his niggling knee injury and a successful ‘joint-testing’ completion of the Salford Sprint Triathlon (pic) gave him some much-needed confidence to tackle the truly formidable St Begas Ultra. The organisers of this event describe it as a: “…tough as you want it, largely off-road 36 ‘country’ mile trail race, which follows a point-to-point route from the heart of the Lake District all the way to England’s west coast. Based on the long distance St Begas’ Way route, runners follow the path of the legendary Irish princess, travelling the (approximate) 36 miles between two chapels that both bear her name.” What they don’t mention is the terrain and underfoot conditions would have most experienced hill walkers doubting the viability of doing it in one straight push.

Compounding the brutality, race day itself brought searing summer heat which led even the very experienced Steve to describe the ascent of Honister Pass and the fabled ‘Bummers Hill’ (which came at marathon distance) as “nearly the end of me”. Steve being Steve, though; he pressed on… to near disaster. The heat, fatigue and encroaching dehydration led to a period of truly delusional confusion where he was convinced he was off course and heading the wrong way; in spite of fellow competitors all around him trying to convince him all was well. Fortunately he believed them, came good, and went on to finish to tell the tale.

Speaking of tough things the 8th out of 9 in the 2016 Trunce series took place on 22nd August and Mick W and Rosie Wigg – definitely to be regarded as Trunce stalwarts by now – dutifully took to the start line. High recent rainfall levels saw many a competitor literally dunked up to the waist in the three river crossings but, as far as we know, all who started, finished. Mick continued his incredibly impressive conversion to competitive runner to finish 22nd out of 240 overall. Rose also performed brilliantly to finish 165th overall. These are seriously good performances in this highly focussed event.

Parkruns have featured quite a bit with members competing all over the place – even whilst travelling. We’ve made our presence known at Stretford, , Bradford and , as well as at the courses which feature more frequently. Notable performances have been those of Jenna G at Bradford with a 2nd in age (148/442 overall), Mick W at Nostell with a new course PB and Steve W in with a 3rd overall. Jenna shows great promise, she’s relatively new to endurance sports but her super-fluent running style is very efficient and there’s every indication she could be very quick indeed. 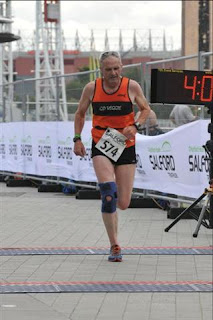