Emma S has had some good results lately kicking off with a 6/56 in age group and 31/251 female overall in the Woodhall Spa sprint triathlon (26th June). This event is fairly unusual in as much as the swim is in a 33m heated pool but is outdoors in a traditional setting. It’s quite an engaging swim, what with all the competitors and the effect of the wind – not to mention the occasional errant crisp packet. Nonetheless Emma had a decent swim, made places on the bike and then had a super-strong run to hammer home the good result. This also happened to be the third in a three race series and her consistency across them has been rewarded with a 2nd in age group.

Continuing her good running form, Emma had a very good result in the Jane Tomlinson 5K Canal Run (5th July) where, even amongst some pretty serious club runners, she  managed a highly credible 15/158 female overall and 2nd in age group. Her time was just about bang on 24.00mins, very impressive for this twisty multi-terrain course, which has more than its fair share of twists, turns and narrow gateways.

Emma was once again in open-event action last Sunday (17th July) at Hatfield sprint tri (750m swim / 22K bike / 5K run) but had some ‘open-water swim trauma’ (it happens), which wrong-footed her for the remainder of the race. More open-water training is now high on the agenda…

Steve W competed in the same event and in addition to his 7th position overall continued his age-group-winning ways. Steve (pic) hasn’t been beaten in his age group in triathlon since August 2014 (when he was 2nd) and has now strung together 18 unbroken triathlon victories. However, this is set to end next weekend! The reason Steve reports this awesome streak is doomed revolves around his entry in The Outlaw long-course event. Steve has never competed at anything approaching this distance (2.4 mile swim / 112 mile bike / 26.2 mile run) and freely admits this event is simply a ‘life tick’ and is all about completing rather than competing.

Continuing the theme of Go Veggies at the same event, Jon Z is on the start list for The Outlaw, too and will be making a valiant effort to become (we believe) the only person with an artificial heart valve and a pacemaker to take on this fearsome challenge. Just a couple of weekends ago Jon performed well in the Norfolk Half Outlaw (1.2 mile swim / 56(+) mile bike / 13.1(+) mile run) where his masterful pacing skills and huge experience in longer events saw him finish 4/8 in his age group. In spite of the slightly longer-than-standard bike and run legs, and the hilly nature of this event, he also beat his 2016 70.3 [mile] mark set in the middle-distance event a couple of months ago by a full ten minutes. 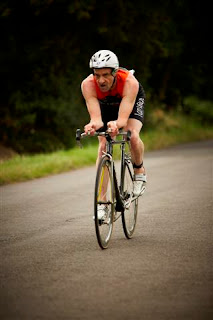