The past two weeks has seen much running and multisport activity.

Emma S competed in the Allerthorpe Sprint tri (pic) and suffered in a really frenetic swim. This swim is notorious as the lake is really shallow and silty. A brush with the occasional tench is not unknown. The twists and turns of the swim course mean that competitors are regularly to be found bumping and bashing into course markers and each other. In spite of losing minutes Emma rallied and put in  good solid bike and run to finish 2nd  in age category and in the top half of the female field overall.

Mick W has continued to improve and is now unquestionably at the sharp end of competition in age group events. His equalling of his course best at Nostell’s parkrun last weekend (sub 20 on a very hard course with strong winds blustering about) saw an impressive age group win.

Jon Z has pushed on (as Jon Z does) through some recent health issues and has competed in the Marske 10K and the Cleveland Short Course triathlon (swim 1500m / bike 25.07 miles / run 5.25 miles) this past couple of weekends and though typically hard on himself only just missed a 3rd in age group in the tri. Jon reports that the run in particular was ‘entertaining’ taking in parts of a long-distance footpath and crossing overgrown pastures. Apparently, the long grass and ‘minefield’ of cowpats made the going less than straightforward.

Rosie Wigg continues to tread the tightrope of competing without exacerbating niggling tears and has put in strong and thankfully injury-free performances at Sandall Beat 10K and the Darrington 5 mile ‘fun’ run. In reality, fun it isn’t, it’s seriously competitive and takes in a hideous steep climb that just goes on and on. We’re looking forward to Rose being able to go at a run full-tilt without the fear of tearing muscles… 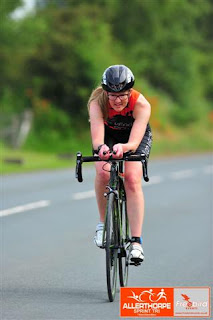