How to get even wetter than usual in Manchester

Recent activity has revolved around running, which maybe comes as no surprise given the time of year, except for one notable exception in the form of Steve knows-no-fear C who, in the wake of New Year celebrations, returned to the brain-freezing activity of a mid-winter outdoor swim. The venue was Salford Quays and the distance 250 metres. It may not sound far but immersion time was long enough to witness Steve shivering violently come the point where shrivelled body re-acquainted with dry (or as dry as it ever gets in ) land. Absolutely not one for wimps: or anyone sane.

Thankfully, Steve seems to be getting through health issues that have curtailed his ultra-event activity a bit in the last couple of years and is again aiming for some longer distance events with a target date as soon as March pencilled in for a 50K run. Part of the preparation has been to hit the fells with Len, with a bit of speed work thrown in in the form of the recent Hit the Trail 5-mile multi terrain race.

The Lake District has been Steve’s recent choice for canine-accompanied training fells where persistently wet conditions meant a couple of very trick situations up on the tops including one very swollen crossing of Lingmell Ghyll, which saw even the substantial bulk of Len  needing a bit of assistance to make it through in one piece. Both prevailed though, if slightly bedraggled.

Other members have stayed substantially warmer and drier, if not totally warm and dry. Rosie Wigg raced in round 4 from 5 of the Yorkshire-based PECO cross country series at , north where she had a credible age group and a top-half-of-the-field overall finish whilst others have been hitting parkruns to maintain a bit of top-end fitness. Claire W, Mick W, and Emma S have been out at Pontefract and Nostell and there’s even been a bleary-eyed, post-hibernation appearance by a considerably-larger-than-usual Steve W at : the new triathlon season must be approaching. 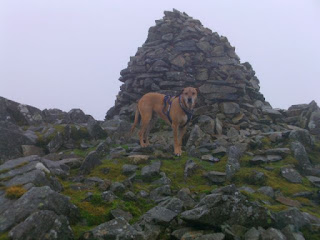