The Steve C guide to making hard events even harder

In spite of cracking a couple of ribs a few weeks ago in a too-giddy-canine-related tripping incident, Steve C shrugged off the pain and has been back in the thick of things this past couple of weekends. First up was the Montane Trail 13 in Grizedale where the ever-changing weather briefly smiled and allowed competitors some reasonable (for the season) conditions. In spite a very health-interrupted program this past couple of years, and the ribs, Steve was pleased to manage a time within a minute of his efforts in the same event a year ago.

Last weekend saw Steve and a vegan friend (Britta) take on the Anglezarke Amble, a 24 mile LDWA event run across the West Pennine Moors which takes in the well known landmark of Rivington Pike.

The bottom line is: it’s up on the tops and always bleak.

The event was proving typically tough but, as if the cold and exposure wasn’t enough, matters took an unexpected turn when a fellow competitor suffered a heart attack and collapsed in front of our intrepid duo. The unfortunate chap wasn’t breathing and had no pulse so Steve and Britta immediately sprang into action and administered CPR until medics / the mountain rescue helicopter arrived about 20 minutes later.

The man survived but the enforced stop left Steve and Britta nose-diving towards hypothermia. Undeterred, they carried on complete with completely numb extremities, including such fundamentals as feet and – against all odds – successfully made the finish. 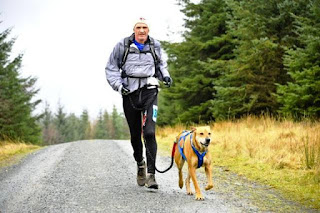