Continuing the theme, running has been the most popular recent pursuit with Steve W competing in the Darrington 5 mile road race and Mick W and Emma S (coming back after injury) taking on the 5.3 mile multi-terrain Ackworth Road Runners / Goole Viking Striders handicap event based on the picturesque Anglers' Country Park near Wakefield. Both events were run off in swelteringly hot conditions which should have - but didn't - deter Mick from running to the start of his event, and then home again afterwards; making the whole round trip somewhere around the 10 mile mark. 10 miles in 30 degrees C and almost 100% humidity is beyond the call of duty. Probably the best performance of the week was with Steve in the Darrington event with an 11/195 overall finishing position.

In non-running news, Steve C once again bobbed to the surface miles from nowhere when he took part in the Bantham Swoosh, an Outdoor Swimming Society organised event which entails a 6km swim amongst spectacular scenery down the River Avon in Devon, finishing in the sea at the river's mouth on a pretty beach (or - dependent on flow - just as likely a good way towards Ireland). The event is so named as it is supposed to include a really fast latter section where current and tide conspire to jettison the participants along like some kind of huge and utterly uncontrolled-in-any-way theme park ride - a particularly muddy, choppy, and salty one!

In spite of clocking the 6km in 95 minutes Steve reportedly didn't encounter much of a swoosh, but did thoroughly enjoy the experience. 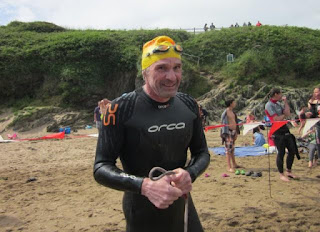