Steve W and Emma S both took part in the Allerthorpe Sprint Tri on Sunday (Swim 750m / Bike 20K / Run 5K). This is a well organised event and both Go Veggies present have competed in previous years; so had a good idea of what to expect. Though it's a pretty straightforward event as far as the bike and run go, the swim is a bit of a tricky one. It's tricky because the swim is in a relatively small, shallow, silty lake which, in order to achieve a 750m course, requires racers to complete a couple of circuits. The silt means visibility is non-existent and the multi-laps means lots of turns and marker buoys, and literally dozens of competitors all trying to swim in the very same bit of water at the very same time. Suffice to say it's a bumpy ride!

Steve negotiated the swim with only a handful of dunkings but Emma definitely got caught up in traffic. Fortunately Emma's relatively strong bike and run meant she made up many places and finished credibly in the top half of her age group category.

Meanwhile, with the benefit of a reasonably clean swim, Steve made his usual huge gains on the bike and held on in the run for an age group win and a top 20 position overall - not bad considering the quality of the field and a super-abundance of team GBR age-group racers of approximately half his age. 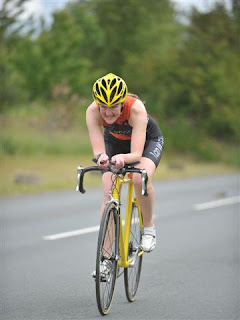