This harmless enough and undeniably catchy title was really all about suffering; the reality behind the snappy headline meant racing three events over the course of three consecutive days. And the events weren't easy.

For those up for the challenge, here was the itinerary:

Mick W, becoming increasingly known for bonkers challenges, decided it would be a good idea to attempt the challenge and so, armed with calf guards and ice packs, did just that.

Not only was he one of only 25 people to manage all three events, he did well too. 2 x top 20 finishes and a course PB on the Trunce day (shouldn't be possible on the back of two days racing) were the reward. Respect! 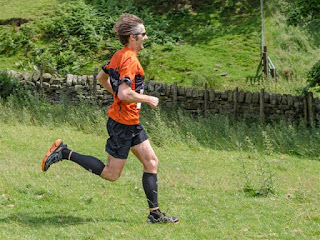 Nowhere near as body-breaking as Mick's effort was Steve W's flurry with the well organised Lincolnshire Edge triathlon on Sunday 12th July (Swim 750m / Bike 25K / Run 5K). This was the first running of this particular event and featured Cadney Reservoir (splendidly situated in the very peaceful North Lincolnshire countryside) as the swim venue. The reservoir made for an interesting swim leg as it teemed with short strands of algae suspended at every depth - but such was the visibility that this was all that competitors could see. Once swimming the algal blooms made for an extremely disorientating Doctor-Who-time-tunnel effect. Fair to say that one of the 'attractions' of competitions that involve an open water swim is that there's nearly always something weird and new to contend with - often something alive!

Steve managed the swim in reasonable-for-him fashion and - following the absolutely 100% necessary assitance to exit up the algae-infested-comedy-slide (aka the exit ramp) - dropped into his usual strong bike form to climb well up field meaning he ws able to begin the run section in 3rd position overall. Losing only one place on the run itself ultimately resulted in an age group win and 4th place overall. 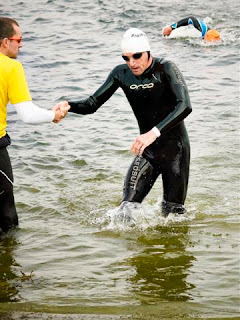