Sunday (1st March) saw the final round of this year's PECO cross country series held in Roundhay Park, Leeds. Conditions were kind underfoot as the recent drying winds and sunny spells meant the whole course could probably have been run in ultra-light road shoes. Only one horrendous lung-busting hill really tested the racers and this was a sting-in-the-tail finishing trick sneakily sprung by the organisers. Mick W, Emma Smith and Rosie Wigg were the GV contingent present and all ran well enough to count for their respective Ackworth Road Runners 'A' team. As previously covered, the nature of UKA sanctioned cross country team competition means that all competitors have to run in their affiliated team's official vest but - as can be seen from the natty shorts - it's still possible to score a stealthy GV mention. Excellent trying-hard-up-the -horrible-hill face from Emma and the lady she had just passed! 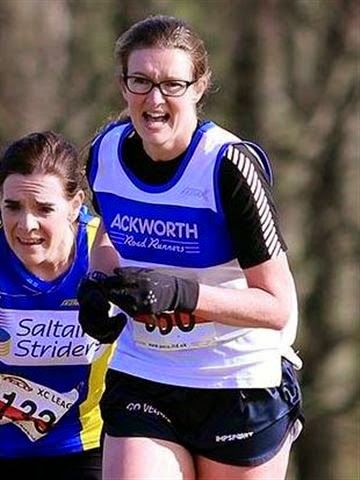 Sunday also saw Steve W - by a twist of fate - complainingly taking a last minute gifted place in a notoriously gruelling 9 mile road race based around the very exposed and open countryside of Norton near Doncaster. The race is hilly to say the least and annually attracts a strong field of loyal if slightly masochistic runners. Sunday's edition was made all the more entertaining by a fearsome wind that buffeted competitors constantly and quite literally, on more than one occasion, blew runners sideways off the road and onto surrounding verges. Steve only knows one speed and set off well up the field at his usual sprint distance triathlon 5K pace - only to blow spectacularly at approximately the 3.1 mile mark. From about 30th position overall, the last 5.9 miles were reported to be a reflective affair with Steve having plenty of time to think about the concept of pacing whilst slipping gracefully back through the field to a just-scraping-the-top-10 in age group position.
Posted on: Tuesday, March 03, 2015