Emma S continued her excellent bike form on Sunday 2nd July where she recorded the second-fastest age-group bike leg in the Foremarke Hall sprint tri, which helped to power her to a creditable 5/25 in her age group and 17/72 in the female field overall. Emma hasn’t been able to fit in much (any) swim training this season so has huge potential to improve further - as long as she can juggle training and keep her form in  the other disciplines, of course.

Emma again flew the Go Veggie flag on what is one of her favourite 5K courses and had an impressive run to finish in 23.53. Her finish time was all the more impressive given the hot and humid conditions on the evening of the race, plus the ‘interesting’ crowd participation that traditionally accompanies this event. Racing around the centre of post 7.00pm attracts all manner of spectators from pub-goers to the town’s all-too-many cardboard-city dwellers. It’s generally a very good natured affair but it has been known for competitors to have to hurdle the occasional collapsed drunk.

Steve W is at the upper end of his triathlon age-group cohort so, rather than concentrating on his specialism of sprint-distance tris, is mixing things up a bit this year. As part of his not-going-stale strategy, Steve took to the start line of this middle distance triathlon last Sunday with a single determined plan not to overdo the bike leg. A cracking (for Steve) 1900m swim split of 31.04 saw him out of the water in 12th position overall and a swift transition saw him out on to the bike course in 9th.

And so to the plan of a measured bike effort. This was reportedly difficult for Steve, who had to remain super-disciplined and allow several fellow competitors to come by him and disappear up the road in order to stay under his self-imposed limit of 80% of his maximum heart rate.

The end of the 85K bike leg saw Steve tired - but crucially not frazzled - and he was able to painfully shuffle a little faster than a few others (pic) and picked up a few spots in the 20K run leg to finish an impressive 7th overall in a time of 4:33:09.

Triathlons of this distance are all about pacing and though it’s a fine line between optimising speed and being doubled over in a hedgerow, Steve thinks it might be possible to raise his pace in the bike leg just enough to bring about an overall improvement. Watch this space… 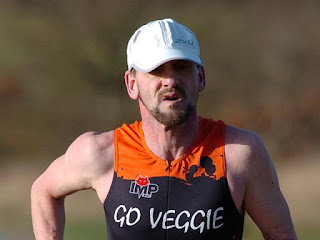