The first of this year's Trunces conspired to stamp it's authority with torrential downpours leaving river levels high and the rain-soaked soft bits in full-on shoe-stealing mode. Mick W and Rosie Wigg took it on nonetheless and both had pretty solid runs. Mick's 51/420 overall was particularly notable (pic). The fact that the Trunce can now command approaching 500 on the start line is either a testimony to the current popularity of running or an indicator that masochism is on the up.

In parkruns, Steve C made an appearance at Stretford and in spite of concentrating lately on longer / slower training efforts knocked out a respectable 23 min run. Other Go Veggies out and about in parkruns this past couple of weeks include Emma S, Rosie Wigg and Steve W. Once again, plenty of age group wins have been forthcoming.

Speaking of Steve C's return to ultras, he recently conquered The Vale Coastal Challenge 50K event which is in anyone's estimation - as it somewhat understatedly says on the tin - indeed a challenge. Not only is this 50 kilometres of coastal trail across the Vale of Glamorgan a ridiculously long way to run, but the terrain (savage) and the conditions (a quagmire) make for an absolute war of attrition.

Steve's time of just under eight hours (a mid-pack finish) gives some indication of the ferocity of the event. In fairness, the fact it's promoted by a group called Run Walk Crawl gives any prospective entrant a pretty fair warning of how things tend to pan out. 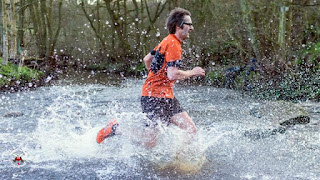