There's been lots of parkrun activity lately with many members sharpening up for the coming season. We've had representation up and down the UK with appearances as far afield as Nostell Priory (Yorkshire), Stretford (Manchester) and Greenock (Scotland). Numerous age group wins have been scored.

Jon Z has already been back in open event action with appearances at the Clumber Park duathlon (run 10K - bike 40K - run 5K) and the Helmsley 10K multi-terrain race. Jon wasn't very happy with his performances but is notoriously tough on himself. Just being out there and competing (still at a good standard no matter his disappointment) is both incredible and inspirational given his artificial heart valve and pacemaker.

Rosie W has also started her open event campaign with a strong performance in the Wakefield 10K last Sunday (03/04/16). In spite of a rolling course Rose - by a matter of seconds - only just missed out on a sub-50 minute run to finish well up her age group. It wasn't for the sake of trying: that's a grimace rather than her usual smile. Pretty good going given that this event attracts some very fast athletes and boasted a field of 1,700 in total. 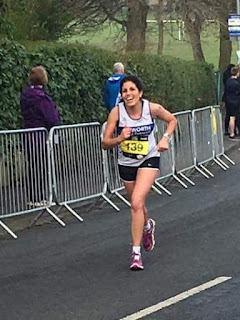