Will T was in Olympic distance triathlon action at London’s Canary Wharf over the weekend of 8th/9th August.

A series of races over the course of the two day event essentially means this meeting can boast the title of the world’s largest triathlon: to give some idea of scale, 13,000 competitors and 30,000 spectators were in attendance.

Will took to the 1500m River Thames based swim along with about 500 others ensuring something of an initial thrash before the field strung out and competitors found their pace. Coming out of the water in just over 31 minutes, he then took to the 40 kilometre bike section on the unusual choice of a folding bike. This deservingly proved something of a minor celebrity with fellow competitors and spectators alike. A first-lap-unshipped-chain incident didn’t slow Will too much and at about the 2 hour mark he took to the final leg: the 10K run.

Conditions were hot and oppressive but the cheering crowds encouraged good pace and Will completed the three lap run for a total finish time of 2:47 – well under his 3:00hr target.

An impending move will soon see Will leaving his flat where storage space is limited (hence the folding bike) and the delivery of a more conventional race bike: something that will definitely come into it’s own as Will prepares for next year’s Ironman Wales.

Altogether a solid performance in this, Will’s first year of triathlon competition. The move to full Ironman distance so soon after taking up multisport is the stuff of tough competitors. Watch this space… 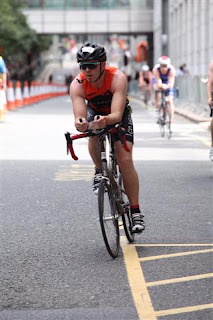