Jon the Half Outlaw

Jon Z was again in confounding form on Sunday (31st May) when he took on the infamous Outlaw Half Middle Distance Triathlon (swim 1.2 miles / bike 56 miles / run 13.1 miles).

A slight 'medical issues' quibble with the organisers saw him successfully making a case that in spite of his pacemaker and carbon fibre heart valve, he should be allowed to compete; not a conversation most people have to undertake just before a mammoth effort!

The weather didn't help with pre-race hassle either, with unseasonably torrential rain and strong winds seeing Jon, and most others, donning their wetsuits in-vehicle before bravely stepping out to face the truly miserable 'early summer' day.

In spite of it all, Jon not only completed the gruelling distance in 6:34:44, but only just missed the podium in his age group. He also finished 754th out of a total of 1052 finishers. Rates of attrition were high with a total of 38 competitors withdrawing, unable to make the full distance.

Not content with simply competing, Jon also raised the significant sum of approximately £5,500 in aid of South Tees Hospitals Charity; it was this trust that helped Jon through his surgery and continue to do sterling work with him and many others. 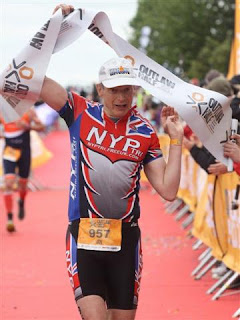