We had representation at three parkruns this weekend with Claire W, Steve C and Mick W all flying the flag at venues spread across: Pontefract, South Manchester, and Nostell Priory. Great to see Steve C back in parkrun mode even if the short distance was a shock to his well-honed 'ultra' system. In fact, Steve being Steve wasn't happy with the mere eye-bulging 5K effort and the same afternoon, accompanied by Len, toddled off to the Peaks, where, after the small matter of running Chrome Hill, continued with even more running and general dog-led-endurance-effort frivolity the morning after around the Longshawe Estate.

Meanwhile, in multisport action, Steve W competed in the Newmarket Sprint Triathlon (300m swim / 22K bike / 4K run) and had a decent showing. This breakdown of distances suit Steve well as his strengths are definitely in the order of bike, run and - very much finally - swim. The short swim saw him limiting time losses whilst the long bike saw him climb well up the overall order. The short run should have seen him holding station - or even making a slight improvement - but for some reason his legs just weren't there and a slower than expected run eventually saw him with a not-quite-on-it 9th place overall. He did, though, still win his age group making it 4 wins from 4 triathlons for this season so far.

That's a hex if ever there was one! 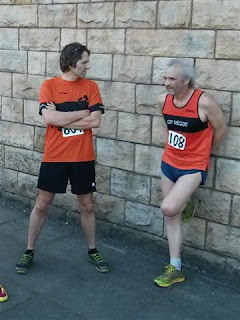