Emma S braved horrendously cold, wet and windy conditions on Sunday (3rd May) to flash the GV colours in the Dave Lloyd Lincoln Sprint Triathlon (Swim 400m / Bike 22K / Run 5K). This event is testimony to the fact that Lincolnshire does indeed - in spite of its popular image - have hills. Nowhere is this better illustrated than about a mile into the bike leg where the pleasant and accommodating countryside yields to a fault line and the bike course at this point is not too unrealistically described as a cliff with a road straight up it.

Luckily, Emma - having done this event before - knew what to expect. Many who were not so savvy were off their bikes and pushing; not the best look on a full carbon race bike!

Working hard through the buffeting winds, Emma completed the bike leg without too much trauma and took to the run feeling pretty fresh where she continued to show race-smarts by taking shelter from the wind from slightly faster runners which eventually saw her finish a very credible 7th from 25 in her age group. 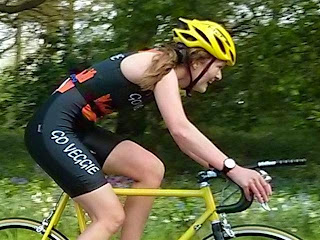