The venue is something of a mixed blessing as although the entire racing route is on closed and private roads, the site is not huge. Logistics therefore dictate a 6 lap out-and-back bike course with a dead turn at each end meaning 11 gruelling almost-dead-stop-followed-by-full-acceleration efforts; not a course for bikes with poor brakes.

Fortunately, though it could hardly be described as cutting edge, Steve has a bike that lends itself well to being flicked about on such courses. The bike, in fact, is something of a transition-based celebrity. It is often - in this era of 'full aero carbon monocoque everything' - considered by faster triathletes as, at best, something rescued from a time capsule.

It is true that Steve's 'chrome' bike is a simple steel tubed monolith, almost exclusively made from parts lovingly salvaged from the 1990s, and features many home-adapted bits and pieces cunningly fashioned with hand tools and an old-school eye. What is also true is that it Steve's chrome' bike doesn't really respect the 'full aero carbon monocoque everything' approach to racing and regularly leaves the riders of multi-thousand pound carbon sculptures scatching their aero-helmets in disbelief.

And so it was the case on Sunday with Steve smashing the bike leg to help him to a clear 1st in age group and a joint 4th position overall out of a field of about 300.

Some old bikes, and some old blokes, just refuse to roll over. 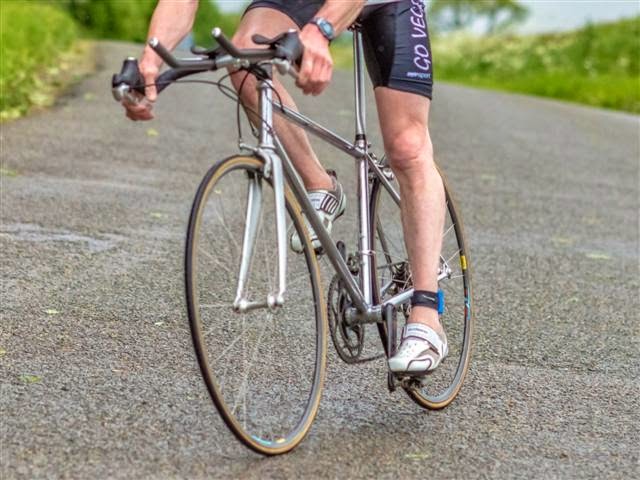