It was quite a busy weekend, with Emma S and Mick W kicking things off on Saturday morning with parkruns at Nostell and Wakefield respectively. Wakefield's Thornes parkrun venue was Mick's first run-in-anger for nearly a month following a winter bug but he showed he's bouncing back well, recording a very respectable 21.05 on this hilly, twisty, muddy course - exactly the same time he recorded when he last did the event just before falling ill. Emma took things easy at Nostell and ran with her (by now renowned) 'reluctant' racing dog (pic below) - mainly using the event as a leg-loosener before a big cross country effort the following day.

Speaking of which: Sunday saw round 4/5 of the PECO series held - on this occasion - in Weetwood, north Leeds. A mercifully dry preceding week saw the course in good condition underfoot meaning lost shoes and long, soggy, flailing socks were a rarer-than-usual sight. It was still tough though, with plenty of twists and turns and many nasty short sharp uphill sections. Emma was pleased she'd saved something for the day and had a good run finishing 76/215 females overall and in the top half of her age group. Other GVs present were Rosie Wigg and Steve W. Rose showed consistent form and pipped Emma finishing 72/215 female, whilst Steve demonstrated a hint of upcoming triathlon season form with a 4/51 age group finish, and in the process showing a dirty pair of heels to many an athlete half his age.

Steve C, meanwhile, found himself gravitating back to the Lake District for a 13 mile trail race based on Grizedale Forest. Unlike with the bonkers Big Chill Swim, this time Len was allowed to participate too and the caniX duo successfully completed the scenic - if predictably tough event - overcoming the harsh terrain and the frosty / mainly foggy conditions. The Lake District reportedly didn't disappoint though, with low-lying fog sometimes giving breathtaking views of exposed 'crispily sunny' peaks: almost enough to make a marathon runner forget the incessant pain and fatigue, if only for a fleeting moment. 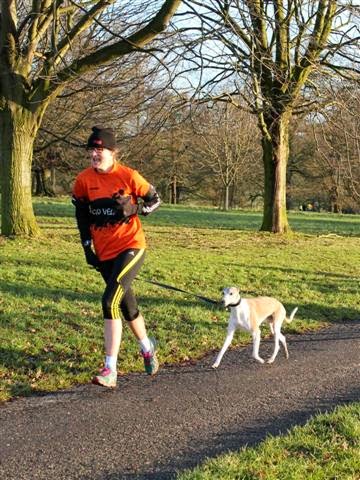