Half a dozen Go Veggies took to various parkruns this past weekend with Nostell and Sheffield Castle venues seeing the flag flown.

Mick and Rosie Wigg made their Debut at the Sheffield Castle event: a very intimate affair with only about 50 runners traditionally making the effort each week. The comparatively low turnout is probably due to the fact that there are 5 or so parkruns within easy reach of Sheffield centre and 'The Castle' is notorious for its climbs. Three laps of a seriously lumpy course, including three ascents of a hill that goes on for about half a mile is the order of the day - not one for the faint-hearted or hung-over. Mick and Rose both showed awesomely well. Mick was 7th overall and Rose won the female event.

At Nostell, meanwhile, Claire Whitwell, Emma S and Steve W flew the GO VEGGIE flag. Claire ran with her canine companion while Emma and Steve cracked on with a straightforward 'speed session' in preparation for the fast approaching multisport season. Both Emma and Steve went well and both recorded new fastest times for the venue. Steve (pic) was fastest in age and went on to do a really awesome mime act at the finish. 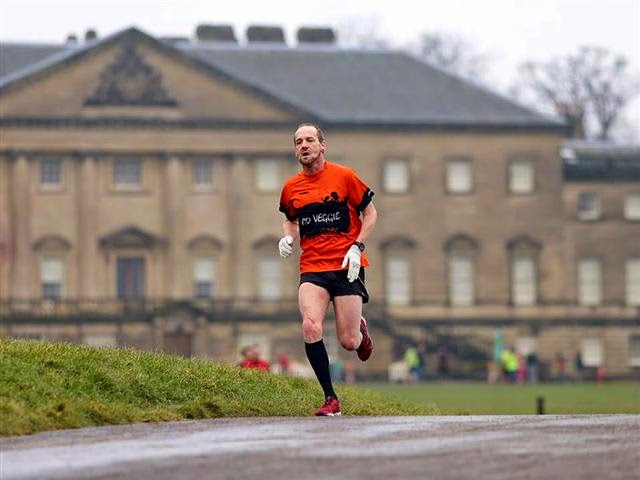