Spurred on by his recent cross-duathlon début, Mick W took to the start line of no less an event than the English Cross Duathlon Championships on Saturday (8th November) and - at the Sherwood Pines venue - found himself surrounded by a lot of very thin people and about two million pounds-worth of carbon.

Because of the numbers involved (more than 500) the race, which comprised a 5K run / 20K bike / 3.6K run, was split into two age-group-dictated waves.

Mick's race started at 8.00am and conditions were ideal. Overnight rain had quickly drained away in the sandy soils of the Sherwood Pines forest and left the going fast and good. Mick showed he meant business right from the off with a middling 6-minute-per-mile pace seeing him in a decent position at the first transition. His bike leg was - as in the last race - super fast and it saw him steam past loads of fellow racers and well up his age group ranking into10th position. Showing that he's getting the hang of it, he even managed to maintain a low 7-minute-per-mile pace for the second run leg and - highly credibly - held on to his 10th place in age group until the finish. Given that Mick's just started out in duathlon, and the level of competition at this English Championship event, that's some good going. 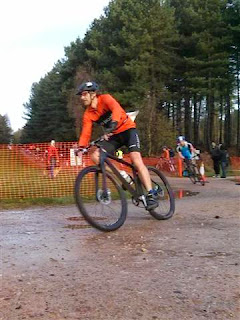 Steve's race started at 10.30am, about an hour after the heavy and persistent rain did. Conditions for this second wave were atrocious, described by the organiser as the worst they'd ever encountered in the many years of running this event. Fair to say, before Steve's start, much sibling banter went back and forth complete with some fairly forceful instructions to 'man up'.

Steve begrudgingly, but dutifully did. An intentionally steady first run saw him retaining enough energy to hammer the energy-sapping quagmire-like bike leg and hang on in the second run for a splendid 2nd place in age and the booty of a Triathlon England silver medal.

Fair to say the conditions were contrary to the brothers' strengths. Mick is a very accomplished bike handler and would have undoubtedly gained even more places in the atrocious 2nd wave conditions. Steve, on the other hand, may well have prioritised attempting to keep his bike clean over his championship chances. 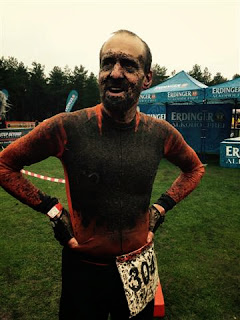