As the 'racing season proper' for many GO VEGGIES is just around the corner there was quite a bit of parkrun activity this weekend.

We again publicly applaud the parkrun innovation. The events are fantastic on so many levels and amongst many other things are an excellent way - if you are race-inclined - to sharpen up with high-end efforts.

Mick W and Rosie Wigg were in action at Pontefract where Mick put his ever-so-slightly unhealthy relationship with technology to the test in an attempt to pace Rose to a course PB. It didn't quite work out but they only missed their target by 8 seconds, finishing well up the field in the process with Rose taking 4th female overall. The lead-out train looks impressive (pic) and features a most excellent trying-hard face from the normally sublime Rose.

Steve W meanwhile ran at Locke Park and in spite of being unable to understand anything the deeply Barnsley-accented pre-race commentator said, followed some genuinely fast runners round the 3-lap up-and-down-twisty-turny grueller to a 9th overall.

Two cani-X teams were out too. Emma Smith ran with Stuart at Pontefract and is one of the few people to ever claim that running with a whippet makes you slower. In reality, Emma was intentionally having a steady recovery effort.

On the contrary, Steve C blistered round South Manchester with Len to a 49/308 position in a new venue (and recent seasons') best of 21:29. The 'power of the vest' continues! Though the fully harnessed Steve / Len duo created a massive stir amongst fellow parkrunners Len insisted on being a bit of a diva afterwards and nonchalantly created his own fun playing with sticks leaving Steve to deal solely with the PR duties. 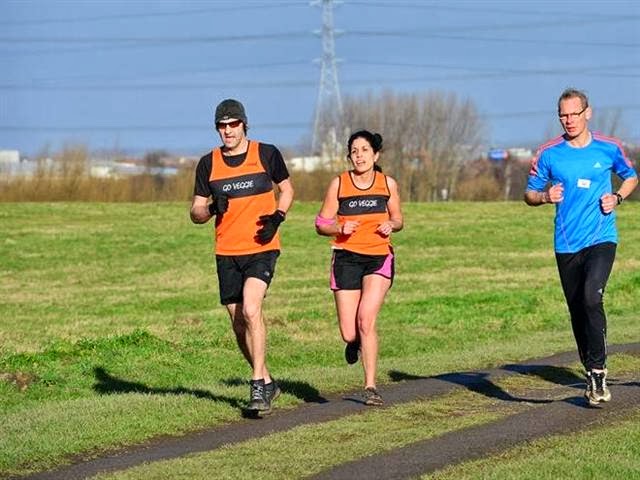